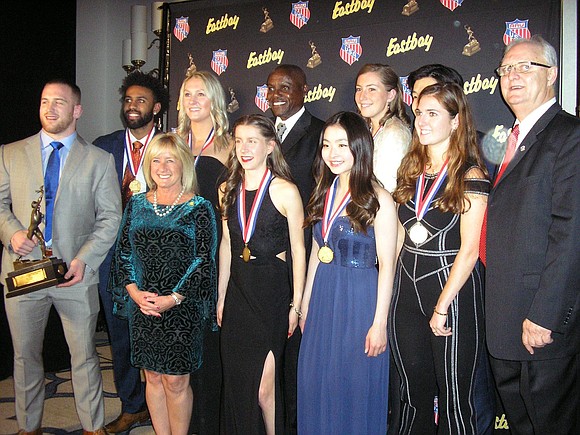 “The award is a great honor, but the part I enjoy the most is getting to know these athletes that I usually don’t get to see,” said Kyle Snyder, recipient of the 88th annual AAU James E. Sullivan Award, honoring America’s top amateur athlete. About to graduate from Ohio State University, Snyder is the youngest Olympic gold medalist and World Champion in American wrestling history.

“It was a great year. I accomplished pretty much everything I wanted to accomplish,” said Snyder, who does not represent the New York Athletic Club, site of the award ceremony, but is certainly familiar with its extensive wrestling history, having competed in the building since high school.

Distance runner Erin Finn, a fifth-year senior/graduate student at the University of Michigan, began organized track in middle school, but said she’s always been a runner. “When I started beating my mom in a local road race when I was about five, we decided someday I’d go out for cross-country,” said Finn, who has competed in the 3,000 and 5,000 meters as a collegiate athlete and dreams of becoming a marathoner.

Finn enjoyed learning that her fellow Sullivan finalists were multidimensional. “It’s so empowering to know you can excel in many areas and pursue many things with excellence,” she said.

“[The Sullivan Award] exemplifies leadership, our sportsmanship and what we do for our sports. I’m honored to be around the other finalists,” said Berry, an exercise and sports science major with a concentration in sports administration. Berry acknowledges being a student-athlete was challenging, but he took his studies seriously. He is currently finishing up spring classes and preparing for the NBA combine and draft.

The evening also marked the second annual Gussie Crawford Lifetime Achievement Award. This year’s honoree was the late Jim Thorpe, a man of Native American heritage and one of the greatest athletes of the first half of the 20th century.