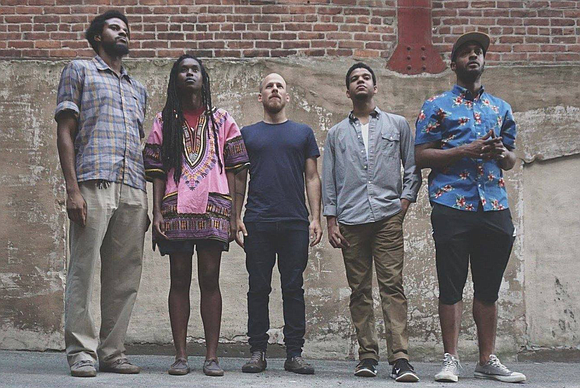 Some music fans might know of the breakout producer and poet Moor Mother, whose music found itself on every “Best of” music list one could think of in 2016. She has since pivoted her attention to a free-jazz ensemble, of which she is a founding member, called Irreversible Entanglements. The genre description “free jazz” is an understatement because the artist, also known as Camae Ayewa, articulates her complex and culturally aware poems over the sound of her four bandmates—Keir Neuringer on alto saxophone, Aquiles Navarro on trumpet, Luke Stewart on double bass and Tcheser Holmes on drums—sporadic, fast-paced entanglements of jazz and creative-music ornamentation.

Although the music can be wild, it’s tightly woven and nurtured by each musician. Stewart and Holmes play an almost nonstop bass rhythm, which makes you ask yourself while watching them play live, how they have the energy to play for 20 minutes straight. They take very brief breaks, whereas Neuringer and Navarro seem to use a circular breathing technique that allows both players to play just as long as their horns blend and flow, play against one another and harmonize all in one stint. The music is intensely impressive. Every musician is undoubtedly talented, so it just makes the band a joy to listen to no matter the genre. Ayewa is patient when she not reciting one of her poems, but she has just as much ability to make the hairs stand up on the back of your neck while being silent. She sways and listens and energetically blends with the music.

“We all came together for a show called Musicians Against Police Brutality that was hosted at the Silent Barn [in Brooklyn, N.Y.], but we played as a trio [Luke, Keir and Ayewa] and the other two members played as a duo,” she said. “But we all felt the connection and we all said, ‘Let’s hang out and record somewhere.’” She shared that as she sat in a cozy bar area after her set at a Pitchfork Music Festival after-show in Chicago. The band had played an early slot at the festival and followed up with a performance in a black box-like music performance space called Constellation.

She continued, “I was doing a show in Minneapolis and I was on tour with Screaming Females, who is on Don Giovanni Records [who released Moor Mother’s 2016 album, ‘Fetish Bones’], and they said, ‘Hey, there’s a guy backstage. He’s a friend of ours. He has a jazz label. I was like, ‘What? Well, I have a free-jazz project!’ So I took out my laptop and played it for him right there. He said the music sounded good and to send him an email. And it went from there.”

Irreversible Entanglements’ self-titled, 2017 album, released by International Anthem, has received nothing but positive feedback according to Ayewa. “We’re going to be working on our next record really soon and we’re going to be on tour this fall in Europe,” she said.

We ended our brief conversation with small talk and a hug. Ayewa is much more quiet than she seems onstage. She was calm and reserved, wondering when she would jump into the massive jam session that included members of both bands, Jamie Branche’s Fly or Die and her ensemble, happening on the other side of the door. One thing is for sure, there aren’t any doors shutting for this free spirited, “liberation-oriented free-jazz collective.”

You can listen to their latest album at https://intlanthem.bandcamp.com/album/irreversible-entanglements.