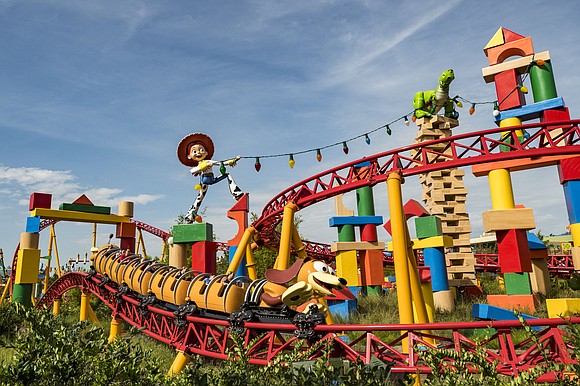 Those planning a trip to Walt Disney World this summer are in for a treat that will take them to “Infinity and Beyond!”

The Florida theme park recently opened its latest addition, Toy Story Land, based on the beloved Pixar movie franchise that debuted in 1995. Since its opening last month, the new land, located at Disney’s Hollywood Studios theme park, turns guests into “honorary toys” and allows them to walk along giant classics such as Lincoln Logs, Tinker Toys and Slinky Dog.

Woody, Jessie, Buzz Lightyear, Slinky Dog, Green Army Men and others are also in on the fun, putting park goers right in the movie.

“With set pieces, staging, attractions and experiences, Toy Story Land represents the best of Walt Disney Imagineering’s collaboration with our storytelling partners at Pixar Animation Studios,” said Bob Chapek, chairman of Disney Parks, Experiences and Consumer Products. “This new land will place guests inside the world of Woody, Buzz and their pals—and invite everyone to experience the joy of being a toy.”

Along with exploring Andy’s backyard, guests are treated to rides, including Alien Swirling Saucers that puts riders in toy rocket ships while “The Claw” hangs overhead. Toy Story Mania!, one of the most popular attractions at Disney’s Hollywood Studios, is also part of the fun, allowing riders to experience the carnival action using virtual objects from baseballs to cream pies to hit targets and rack up points.

“This is a world created by a boy’s imagination,” said Dave Fisher, Walt Disney Imagineering senior story editor. “Andy has brought out all his space toys—it’s a really fun and high-energy attraction.”

Thrill seekers can climb aboard the Slinky Dog Dash roller coaster around Andy’s backyard. Slinky Dog bends and twists his coils around curves, over hills and down drops in what is currently one of Disney World’s most popular rides.

“The first half of the ride is many swirls, turns and dips, and after the second launch come a drop and camelback humps, as if you were playing with a Slinky Dog toy,” explained Dave Minichiello, executive creative director of Walt Disney Imagineering.

Be sure to watch out for Woody, Jessie, Buzz and other characters from Toy Story appearing throughout the land. The Green Army Drum Corps creates a playfully percussive rhythm, and Sarge and the Green Army Patrol march through the land, playing games with guests in a fun and interactive boot camp.

“Disney World is enjoying the most significant period of growth in the last two decades, thanks in large part to Toy Story Land,” said George A. Kalogridis, president of Walt Disney World Resort. “In the run-up to 2021 and the 50th anniversary of Walt Disney World, more exciting new attractions and experiences are planned that position the resort for continued growth and galvanize Disney’s place as the leading vacation destination in the world.”