Unfazed by doubters, Eli Manning is poised to prove them wrong 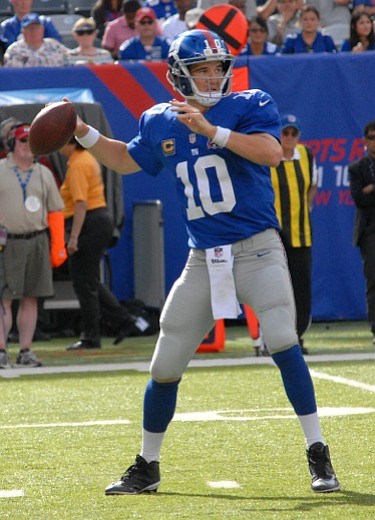 Despite a Hall of Fame level career, Eli Manning’s critics are unconvinced the quarterback should still be leading the Giants’ offense. Bill Moore photo

Eli Manning has two Super Bowl rings and two Super Bowl MVP awards prominently inked on his resume. He is also sixth all-time in the NFL in passing yardage, throwing for 51,682 in 14 seasons, all with the Giants.

Nevertheless, Manning’s success, both as part of a collective and in achieving individual accolades, haven’t satisfied his many critics who identify as Giants fans. Perhaps they have forgotten, have selected memory or aren’t old enough to remember the team’s hardships at the quarterback position in the 10 years before Manning took over as the starter midway through his rookie season in 2004.

QBs such as Dave Brown, Danny Kanell, Kent Graham and Jesse Palmer were all given opportunities, but none held the job longer than three seasons. Kerry Collins was solid as the starter for four and half seasons, leading the Giants to Super Bowl XXXV to conclude the 2000 campaign, where they lost to the Baltimore Ravens, but Collins wasn’t the transformative player the organization’s chief decision makers desired.

So when Kurt Warner, who would go on to be inducted into the Pro Football Hall of Fame last summer, handed over the keys to the Giants offense to Manning in 2004, it began the longest tenure for a Giants starting QB is franchise history. But at 37, this year will be a pivotal year for Manning to demonstrate he is still a playoff caliber quarterback.

The past five seasons he has fluctuated between good, bad and ugly. The ugly periods in large part can be attributed to the travails of the offensive line, which the Giants upgraded in the offseason. The outcome has been they have not won an NFC East division title since 2011 and have only one playoff appearance since 2012.

Ascribing blame to Manning, a plethora of Giants fans were insistent that general manager Dave Gettleman and ownership pass on taking Saquon Barkley with the No. 2 overall pick in April’s NFL Draft and select a quarterback as Manning’s replacement. They ignored the noise and believe Manning and the Giants offense will excel under new head coach Pat Shurmur.

“When you have a new coaching staff, you get a clean slate,” said Manning at the Giants mandatory minicamp in June. “You have to prove to them that you are ready, can get the job done and can be prepared. I try and get better every day, pick their brain and their mind. Make sure I am doing what they want me to do and what they expect from me. I think that is what you try and do every year. You have to go out there and produce, make plays Sunday.”

Thus far in training camp, the reviews have been extremely positive. Manning has had a strong command of Shurmur’s system, which is unsurprising given his experience and intelligence. Still, the naysayers are convinced his time has passed.