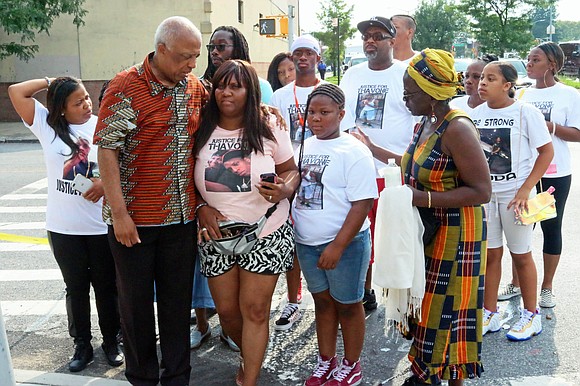 “We charge attempted murder by the police, we want justice for Thavone Santana, and we want the immediate arrest of Sergeant Richard Blake,” Assemblyman Charles Barron told the Amsterdam News.

All five boroughs were represented at the Thavone Santana rally and march for justice, which began at Sonny Abubadika Park in East New York Tuesday, Aug. 7.

Barron and City Council Member Inez Barron hosted the event to demand accountability in the case. Santana, 21, was unarmed when he was shot in the face by off-duty NYPD Sergeant Richard Blake, 40.

At first, police and media reported that a man was shot by a cop during a robbery attempt.

Within hours though, the reports changed, as top brass said they were investigating the case.

Things might not be as they had first been stated.

The two men knew each other, the family insisted, and were involved in an ongoing beef over a woman.

Then the video surfaced, and Blake was put on suspension and told to surrender his badge and gun.

The footage showed the two men talking around 5 a.m. Thursday on Livonia Avenue in East New York. Then Blake takes a pistol out of his pocket and fires at Santana, who drops immediately.

Blake is then seen removing something from his pocket—reportedly a blade—and putting it next to Santana on the ground. Moments later he picks it up.

Santana is expected to recover from the wound to his chin.

Friday, Police Commissioner James O’Neil and Department Chief Terrance Monahan said that with regards to Blake initially saying that he was being robbed, no gun had been recovered.

“Blake has a history of off duty misconduct,” Charles Barron said. “Blake can be seen in surveillance footage attempting to plant a knife at the scene where he shot young Thavone to try and justify his actions.”

Inez Barron said, “We are calling for the immediate firing and arrest of Sergeant Blake.”

Although the NYPD did not respond to an AmNews request for an update, previously a department representative, Detective Sophia Mason, said, “The video captures actions that raise serious questions and require further investigation.”

“Black People need Black power!” declared activist Omowale Clay. “We need to use our power to fight against injustice, police brutality, police murders. We are not going let these police abuse us and then have a picnic with them. This national night out against crimes for us is against police violent crimes in our community. The cop that shot Thavone must be arrested and indicted immediately. Police can no longer defend the police who murder and brutalize Black men. We have got to resist as a people and stay in the streets!”