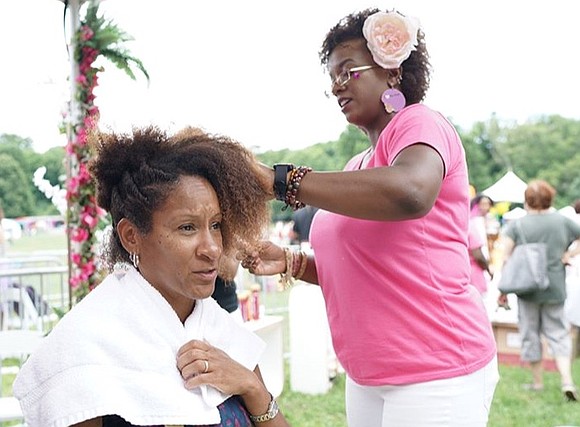 “Your hair is your crown. Rock it!” reads the sign at Beleza Natural, Harlem’s new curly hair salon that opened last week. In this safe haven of kinky and curly textures, women are given VIP treatment. Welcomed by staff women of color, the customer is brought through a large facility featuring a “shampoo” room, a drying room, a styling section with well-lit mirrors, a volumizing room, inspirational wall art and even a “red carpet” that women walk to exit the salon.

Beleza Natural salon aims not only to style natural hair but also to take the necessary measures to understand the customer’s hair state and suitable products. The client is brought into a consultation room, where potential clients share their hair history, including past colors and chemicals. Once an appointment is scheduled, the customer is encouraged to return for a beauty salon experience that is specifically tailored for Black and Brown women. The objective works to challenge the stigma against kinky curly textures unique to people of African descent.

In early African civilizations, hair was a sacred reflection of one’s family background, status and circumstances. For example, those who went to war often wore braids, and those in mourning adopted a more subdued look. However, many believed that hair, because of its closeness to the sky, functioned as a segway to God. As a consequence of slavery, hair marked the difference between Black slaves and white slave owners. As a result, the ways slaves wore their hair was not a beauty standard, but rather a matter of survival and acceptance.

In a New York Times article entitled “When Black Hair Is Against the Rules,” the writer gives context as to why Black people were discouraged from embracing their natural hair. “After Emancipation, straight hair continued to be the required look for access to social and professional opportunities. Most Black people internalized the idea that their natural hair was unacceptable, and by the early 20th century wore it in straightened styles often achieved with dangerous chemical processes or hot combs, or they wore wigs.”

Beleza Natural launched its first international establishment at one of the most prominent areas of the natural hair movement: Harlem. Although the natural hair movement is booming in part because of social media, there aren’t enough salons that specialize in natural hair care. The handful of natural hair salons in Harlem are primarily focused on straightening or protective styling, rather than actually styling natural curls. Beleza Natural attempts to stand out from other hair salons by solely utilizing styles that embrace curly, kinky hair types. Although the salon has the option of chemically treating hair to loosen curls, Beleza Natural has a series of non-chemical hair treatments and products to make curly hair healthier in its most natural state.

Zica Assis, previously considered to be Brazil’s Hair Queen, is the initial founder of the 25-year-old establishment. Before the founding of Beleza Natural, Assis lived in poverty in the shantytowns of Rio de Janeiro. To achieve financial independence, she worked as a housekeeper and a nanny. However, to increase her likelihood of getting hired, Assis often straightened her hair.