‘Sorry to Bother You’ 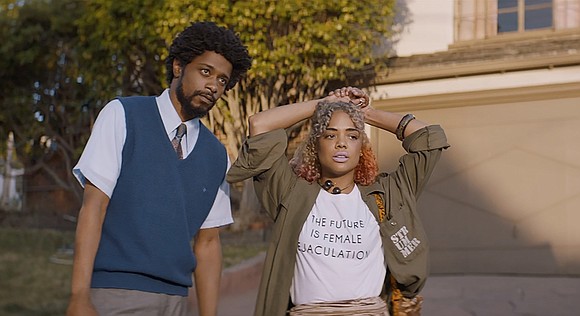 "Sorry to Bother You" Contributed

I recently saw the new Boots Riley satirical film “Sorry to Bother You,” and I cannot stop thinking about it. Last year, many people supported Jordan Peele’s surprise blockbuster “Get Out” and could not stop talking about the ways in which race, casual racism and the horrors of being Black in America were so poignantly articulated on screen. Well, Riley picks up the mantle where Peele left off and has written a movie that serves as a perfect companion piece that delves into not only the individuals who live in a racist and capitalist society but also the ways in which race, racism, capitalism and class serve as institutional structures that are the foundation and guiding principles in America.

“Sorry to Bother You” features the incredible Lakeith Stanfield—who also starred in “Get Out” —as a telemarketer down on his luck until he begins using his “white voice” to successfully sell to customers. Needless to say his career takes off in this dark comedy. He is exposed to new levels and layers of the interplay between race, labor, capital and institutional norms. I don’t want to give too much away. So what I will say is, this film is a must-see. Not only do Danny Glover and Terry Crews give the film additional comedic elements and gravity, but also relative newcomer Jermain Fowler threatens to steal the movie with his comedic timing and nuances in his expressions throughout the film.

We are in a crucial moment both domestically and internationally, and “Sorry to Bother You” brings up some critical discussions pertaining to the role of the government interfering in our lives, what it means to be the working poor and how attempts at collective action are consistently impeded by institutions seeking to maintain a status quo. So many of the scenes in the film had a surreal element to them, but it feels as if we are also living in a surreal time, one in which a president tweets insults about racial groups, individuals, celebrities and women with reckless abandon.

It is no surprise that this story takes place in Oakland, Calif., the home of Boots Riley (and Ryan Coogler) and the city that currently serves as a place of literal and figurative examination of Black possibility and also Black loss. It is no surprise that “Fruitvale Station,” “Black Panther,” and “Sorry to Bother You” all have links to Oakland. I implore readers to see this film if they have not already, not only to support a young Black director but also to think about what has happened and what is currently happening in our nation.

“Sorry to Bother You” left me with questions about what I could do, should do and will do to address institutional inequality. Take the time to see the film, trust me.

Christina Greer, Ph.D., is an associate professor at Fordham University, the author of “Black Ethnics: Race, Immigration, and the Pursuit of the American Dream,” the co-host of the new podcast FAQ-NYC and the host of The Aftermath on Ozy.com. You can find her on Twitter @Dr_CMGreer.