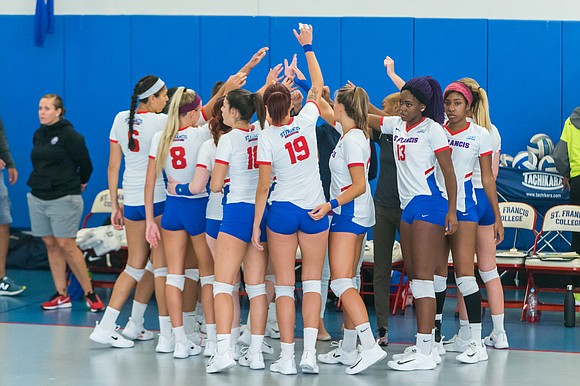 Everything about collegiate women’s volleyball is fast and intense. It is a fall sport, which means intercollegiate action starts in August, conference play commences in late September and the season is done by the time of final exams. Because of NCAA compliance rules, the period allowed for official practice is tight, so the St. Francis Brooklyn Terriers arrived on campus focused.

With only two and a half weeks to get ready for the first match, St. Francis College head coach Abra Rummel said it’s essential to take a long view of the season. Only Northeast Conference play counts in terms of qualifying for the NCAA Tournament, so Rummel considers all matches leading up to NEC action as time for the players to hone their games.

“I’m always thinking how to be a better coach, how to better handle this timeframe, because it is so unique,” said Rummel. “What we’re really committed to in our gym is taking it slow, going day-by-day and really covering what we need to cover, so that come the end of September when conference play starts we’re really and truly the best team we can possibly be.”

Over the course of the season—both nonconference and conference—the Terriers will play several matches against other New York City teams. The matches provide an opportunity to showcase the excitement of volleyball to this sports-loving city. That is important, as St. Francis recently announced it is adding a men’s volleyball program as of the 2019-20 school year.

“It’s an extraordinarily exciting time,” said Rummel. “It’s caused excitement in the volleyball community to have another Division I men’s program. There are a lot of guys out there who want to play and don’t have a ton of opportunity.”

For this fall’s women’s volleyball season, players to look for include junior Taris Pittman. Rummel described Pittman as a very athletic player whose skills have steadily improved since coming to St. Francis. Pittman is a very complete middle blocker, and when she’s playing well, she’s doing a lot for the team. Opposite hitter Ally Speweik is also one to watch.

“Probably the greatest strength of this team is that at any point any one of our players is capable of contributing positively to the team’s outcome,” said Rummel. “If we show up, do our job and play St. Francis volleyball, then it doesn’t matter who is on the other side of the net.”