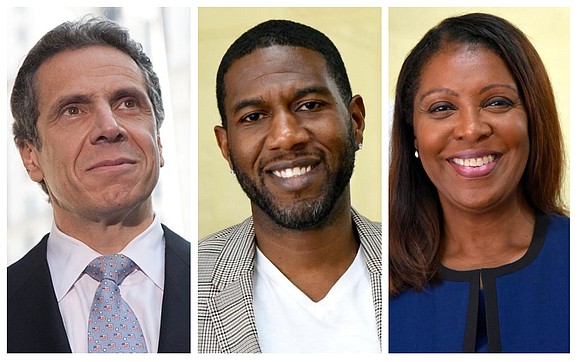 For more than 40 years, the New York Amsterdam News has invited candidates to endorsement meetings the same way, an announcement on the front page of the newspaper. And for those 40-plus years, presidential, gubernatorial, mayoral, senatorial, congressional and City Council candidates alike have come before our editorial board seeking the endorsement of the New York Amsterdam News.

This year was no different. We ran the announcement on the front page of the paper for several weeks and candidates from all five boroughs responded, as did candidates seeking statewide office. Overall the editorial board was quite impressed with the quality of candidates who are running this year and who sought our endorsement. Please remember that the New York State Primaries are being held this year on Thursday, Sept. 13. Our endorsements are as follows:

The top job in New York State is not an easy one. With hundreds of thousands of employees, a budget of more than $168 billion and a population of approximately 20 million people, governing this state is a momentous task. When we look for a leader, we want someone who is strong, honest, caring, capable, hardworking, experienced and compassionate, and who understands the complexities of the job and can work well with others.

Well, that is a very tall order. And inherently a lot of those requirements don’t fit well together, or at least not that we have found. We have two candidates who are running for the office. One a political novice, the other was born into the business. One comes in on the wave of major victories for progressives, the other runs as a seven-year incumbent. The former has activist experience, is passionate, capable, knowledgeable, compassionate, has a strong work ethic, is honest and comes without political scandal. The latter is experienced, hardworking, understands all too well the complexities of the job, has been saddled with scandal in his second term in office and has proved that he works well with others only when they play according to his rules.  But there is something to say for that experience and the ability to get things done. And Andrew Cuomo as governor certainly has gotten things done. He signed into law the $15 minimum wage, championed the Marriage Equality Act, the Paid Family Leave and the Safe Act.

He has fought against homelessness and launched a plan to increase access to affordable housing.

He has set the nation’s highest goal for MWBE procurement at 30 percent. And he has launched an infrastructure investment program of more than $100 billion that has and continues to create jobs across the state, while at the same time modernizing New York’s transportation systems (although the MTA still has a lot of work to go).

Although there are some things that we disagree with the governor on, we have to say that he has done a lot for this state and he has accomplished a lot in seven years. But we know he could and should have done a lot more and we are not letting him off the hook. Although we are endorsing him, we know that he did not get to where he is on his own. And if it were not for his challengers, we are not sure he would have moved on some of the issues he has moved on. So we must credit Cynthia Nixon with pushing him on the issues and making him a better governor. And we will continue to push him forward for the next four years to make this state better. We will not sit back. It is our hope that he will once and for all kill the IDC; be a real leader on environmental issues and not play it safe for the sake of votes; protect our youth in prison; and give Raise the Age more teeth and attention. For the Vital Brooklyn initiative, additional dollars must be committed and a real plan for action going forward must be developed, or else it becomes just another plan on paper. And do what is right for the children of the state in terms of the CFE. And in addition, we hope that with another four years he might learn to play a little better with others. With that, we endorse Gov. Andrew Cuomo with the caveat that we are watching.

The official duties of the lieutenant governor according to the State Constitution are as follows: serve as president of the State Senate, serve as acting governor when the governor is out of state, incapacitated, unable to serve or to become governor should the governor die, resign or be removed from office via impeachment. Additional duties include serving on the New York Court for the Trial of Impeachments, on the State Defense Council and on the Board of Trustees of the College of Environmental Science and Forestry. And lastly to take on duties assigned by the governor. In the primaries, the lieutenant governor and the governor are elected independently, but they run together in the general election.

Kathy Hochul has been lieutenant governor of New York for more than three years.  Robert Duffy preceded her. And for most of the editorial board, it was the first or second time meeting her. Certainly the first time to have a substantive conversation. Hochul is experienced and faithful and has primarily been in the background as is expected from a lieutenant governor. She told the editorial board that her job is to be the eyes and ears of the governor and to champion his signature issues. Although that might be what the governor wants in a lieutenant, we are not sure that is what the state needs.

Jumaane Williams who is her opponent in the race and a current New York City Council member sees the office differently. He would make the lieutenant governor’s office into that of a public advocate and an ombudsman of sorts. He believes that the office could be so much more than what it is and that from the seat he could hold the legislature and the governor accountable. Although technically those roles do not fall under the purview of the job, there is no reason that a lieutenant governor could not take on issues for themselves. As the council member put it, if he is elected, the only power the governor will have over his office will be his budget, and he is perfectly capable of using his MetroCard, Metro North and other means of public transport to get around the state to do the job that he plans to do. Although that might not make the governor happy, if he chooses to work with a lieutenant governor like Williams, all New Yorkers could be the better for it.

Although many politicians are quickly jumping on the progressive and activist bandwagons, Councilman Williams has more than a decade of a proven track record of working on behalf of his community, district, Brooklyn and New York City residents. Essentially, Williams will be the “eyes and ears” of the people throughout the state, not just for the governor.

It is for this reason and for the dedication to the people of New York that we endorse Jumaane Williams for lieutenant governor.

Very few people thought there was going to be a contested race for attorney general in this primary election cycle if you had asked them just a few months ago. No one was expecting Eric Schneiderman to resign and for the position to become open. But this resignation has left an opportunity for several people to get into the race—in particular, three dynamic women, all highly qualified, all fantastic lawyers. Each one comes from a different place: Leecia Eve, comes from Buffalo, N.Y. and a family of public servants; Zephyr Teachout, born out west and raised in Vermont; and last, but not least, is Letitia James, born and raised in New York City. First we must say that New York will be a better state having any of the three serve, as all of them are highly qualified and would do a great job. But when it comes down to choosing one, we went with experience tenacity and grit.

And that is Letitia James. Tish James has served New Yorkers as a public defender, as first assistant attorney general (so she has actual experience in the office), as a council person and currently as public advocate. She will continue to fight for the issues already undertaken by the office and push them further. She will continue the battle against Exxon and fighting to protect our environment. She will tackle Wall Street abuses and protect immigrant rights. She will be unwavering in protecting the rights of women, promoting gender equity and reproductive health care access. And she will use the powers that she does have to take on nefarious dealings from the White House occupants. For these reasons and more we endorse Tish James to be the next attorney general.

*Editor’s Note: Although we are endorsing Tish, we must recognize that Zephyr Teachout is the only candidate not taking corporate money (that is, no money from Wall Street or real estate interests, and no money through LLC loopholes). Teachout’s campaign is an entirely grassroots people’s campaign. She literally wrote a book on corruption and serves as the legal strategist behind the lawsuits to get Trump to divest from his business interests. She ran for governor four years ago and has been ringing the alarm about corruption in New York State and our political system. She had the guts to get in the ring when no one else would. If Teachout does become AG, New Yorkers should know they have a fighter working on their behalf.