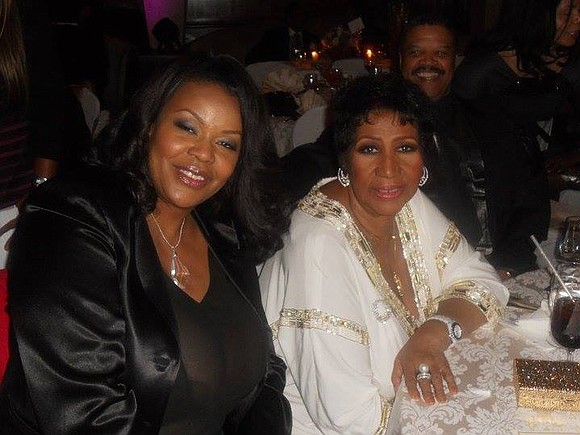 Retired choreographer Louis Johnson worked with Aretha Franklin for 40 years, choreographing her concerts at the Hollywood Bowl, Lincoln Center and many other venues. A member of the New York Ballet Company, he’s also well-versed in other types of dance. He choreographed jazz and modern styles for the Queen of Soul (although he joked that Franklin always wanted to do ballet) and supplied her with dancers for her shows. He now has a tribute to Franklin in his room on his nightstand: red roses stand in a beautiful vase with a photo of a younger, slimmer Franklin positioned in front of them. He smiled as he says he used to call her “Skinny Inny.”

Professionally, Johnson remembered Franklin as being a very good student who easily learned her moves. On a personal level, he happily remembered her as “a wonderful person, and so warm.”

I would come to her house and she would cook me a whole meal—soul food,” he said.

Johnson tenderly recalled when Franklin invited him to her home in Detroit just after her father had died, when his body was still in the upstairs bedroom. “She said ‘Come, I want you to see my father.’” Johnson stated. (I remarked to Johnson that they were obviously very close. Her father’s longtime illness and death were devastating to her, so she must have felt extremely close to him to show him her father’s body. “Yes,” Johnson said quietly.)

“I can’t believe she’s gone,” Johnson remarked. “She was a kind lady and respected everything you did.”

He added, “I’m devastated by her passing. You see the picture over there ... Aretha was so sweet. She was like the girl next door. I will always remember her kindness. She always wanted to give you whatever you wanted.” He smiled.

George Faison, choreographer and friend to Franklin for more than 45 years, shared. “I knew Aretha Franklin as a great artist that grew up, that sang the songs that kind of illuminated my life. The songs that spoke of the pain of our mothers, the love of our mothers, the pathos, the joy, the sorrow and, all through that, I realized that we had really great times with Aretha. She explained our pain and our pathos explicitly.

“The last time she spoke to the nation is when she sang the national anthem and she was old enough to have the voice that would carry the century of America’s growth, pain and progress, all of it in her voice. She was the mother of us all. It’s just unbelievable that we won’t have that voice. But that voice led us for so many years. I gave us so much strength for a very long time. We’re so grateful to God to have had her. We love Aretha.

“We knew each other personally and professionally. What was most important about Aretha is that she was one of the first people to sing about the issue of domestic violence. She sang about the pain that Black women were experiencing in their daily lives, and demanding respect. She stood up for Black women—respect. The civil rights era, she was all of that. She had an urgent call for freedom, serenity, love and r-e-s-p-e-c-t and created amazing love songs and ballad. That voice will be with us always. I choreographed her shows, she always love to add that bit of class to her shows. She was a wonderful woman. Her songs had a story to tell of wisdom and truth, it was to awaken people that something urgent was happening and some truth was going to be told.