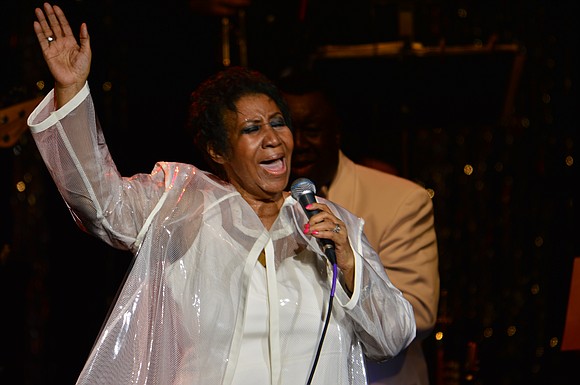 Aretha Franklin, the Queen of Soul, will be remembered mainly for her heavenly voice, which Aug. 16, joined the angelic choir not too far from Mahalia Jackson and Clara Ward, the latter who mentored Franklin and was the companion to her illustrious father, the Rev. C.L. Franklin. The encomiums and praise songs will arrive with a relentless flow, and rightfully so for a singer beyond category who converted sacred songs to secular and secular songs to sacred anthems. For more than six decades, beginning when she was 14 and ending at 76 are vital statistics that provide but a glimpse at her enduring legacy.

And these numbers are bolstered by the 18 Grammy Awards, a plethora of Top Ten Hits and awards up the wazoo, including the Presidential Medal of Freedom (2005), Kennedy Center Honors (2015) and first woman inductee in the Rock and Roll Hall of Fame (1987). Indeed, the commendations almost match her extensive musical chronology, in which each song marks a milestone in the American experience.

Born March 25, 1942, in Memphis, Tenn., Franklin was raised in a household that was second only to the pulpit in the inculcation of the gospel. She inherited her father’s thundering, mellifluous voice that could convert a sermon to song and lift a congregation from the pews with “The Eagle Stirreth Her Nest,” and other venerable recordings. Her mother, Barbara Siggers Franklin, who died when Aretha was 10, gave a portion of her DNA to her daughter’s melodious whoops and sermonettes.

Whether at the piano or soloing in front of her father’s choir, Aretha’s prodigy was prodigious and when she recorded her first album for Joe Von Battle’s (JVB) label, “Songs of Faith” (1956), she was gradually becoming less a member of New Bethel Baptist Church, less a possession of Detroiters and belonging more and more to the world. Making her recording debut with JVB was logical and convenient because her father had already made the label popular.

She burst comet-like on the scene at the same time Berry Gordy was making his impressive mark in the music industry with Motown records. The question is often asked why Franklin wasn’t part of the retinue of musicians assembled by Gordy. That was mainly her father’s decision. The Rev. Franklin, guiding her from gospel to crossover, much like the transitions that had been made by Ray Charles and Sam Cooke, wanted her on Columbia Records, where Mahalia Jackson, Duke Ellington, Johnny Mathis and Tony Bennett were sequestered.

“Berry Gordy was cool,” Cecil Franklin told David Ritz in his biography “Respect: The Life of Aretha Franklin” (Little, Brown & Company, 2014). “Berry Gordy had written some good songs, Berry Gordy had signed Smokey, and Smokey and his Miracles were great, but you couldn’t begin to compare Berry to Columbia.”

So, in effect, Franklin’s father was her first manager, and he placed her in the capable hands of John Hammond, the visionary producer who oversaw her first recordings on the label. Hammond had just rejoined the label in 1958, when he was given a demo of Franklin singing “Today I Sing the Blues.” He listened and said, “This is one of the best things I’ve heard since Billie Holiday. Who is she? Someone said she’s some girl from out of Detroit. It took me about two months to track her down. I did two albums with Aretha. The first album is the one I’m proud of.”

But her seven years, nine singles and nine albums with Columbia did not get her to the top of the charts as she and her father had envisioned. She hit pay dirt and national acclaim when she signed with Atlantic Records in 1967, with producer Jerry Wexler at the toggles. Otis Redding had done one rousing interpretation of his song, but Franklin took “Respect,” which was included on her album “I Never Loved a Man (The Way I Love You),” to another level of cultural appreciation and political significance. In Wexler’s words, she “turned it inside out, making it deeper, stronger, loading it with double entendres.” The song, Wexler added, “resonates on a number of levels and lives on.”

Perhaps if not for the prominence of “Respect,” Franklin’s version of “(You Make Me Feel Like) A Natural Woman” would be her signature song, although there are several other bluesy contenders for this spot. Again, the ever resourceful and cogent David Ritz from “Respect” summarized the song composed by Carole King and Gerry Goffin. They situated the song in a romantic context, Ritz wrote, but “Aretha, however, took it to church. She told interviewers that she heard the song as a prayer. She was praising and singing to the Lord. When her soul was in the lost and found, it wasn’t a man who claimed it, it was God.” It was also her fourth Top 10 hit of 1967 (No. 8) and appeared on her album “Lady Soul” (1968).

The assassination of Dr. Martin Luther King Jr. was a special loss for Aretha. Dr. King was a close friend and associate of her father, and they marched together in Detroit in 1963. That was a fundraising event for the Civil Rights Movement and set the stage for the historic march in the nation’s capital that following August. There was no other song but “Precious Lord” or singer at Dr. King’s funeral, but Franklin apparently had no memory of the song or the event. If she didn’t recall her efforts in raising money for the Poor People’s Campaign, her brother, Cecil, did because he was the chair of the Detroit branch of the campaign.

Franklin’s social and political commitment had no boundaries, and she often upset her managers and company executives, especially after promising to do a concert date to raise bail money for the imprisoned political activist Angela Davis. Once, while watching local television in Detroit, she saw a woman grieving after losing her home to a fire. Franklin found out who the woman was and her address and made out a check for $30,000 to help the woman recover from the devastation. That was just one instance of her charity and generosity, and the Queen of Soul could have very well been called the Diva of Devastation.

As the nation withered in turmoil and an urban crisis swept the land, Franklin with such Top 10 hits as “Bridge over Troubled Water,” “Chain of Fools” and “Rock Steady” provided a rhythmic sound track that by 1972 took her back to her gospel roots with “Amazing Grace.” Her return to the church was greeted with hallelujahs and hosannas from coast to Pentecostal coast. And with one of her mentors, James Cleveland, conducting the Southern California Community Choir, she was back to her glorious and seminal beginning.

Franklin endured a number of tragic setbacks in the summer of 1979, with the suicide of Donny Hathaway and the shooting of her father during the burglary of his home in Detroit. For four or five years he would remain in a coma and the cost of caring for him was astronomical. To pay these expenses, Franklin eagerly resumed performing and recording. When she was offered a cameo appearance in “Blues Brothers” (1980), she relished the opportunity with a rollicking, scene-stealing version of “Think.” That was the same year she signed with Arista Records, where Clive Davis was at the helm, although other than her branching out into video, particularly with “Who’s Zoomin’ Who?,” there is very little remarkable about her stay under the Arista banner.

By the mid-1980s, with the disco craze finally in the rearview mirror, Franklin embarked on the collaboration trail with George Michael, with the Eurhythmics and with Keith Richards of the Rolling Stones. Although these dates paid the bills, they were not the achievements of those that had crowned her past. In fact, for the next decade or so, with a plethora of reissues and composites as CDs became the vogue, Franklin’s most memorable moments were not recordings but various live appearances.

There were the Radio City Music Hall concerts, the presidential inaugural songs for Clinton and Obama, and the Grammy events, none more eventful than her substituting for Luciano Pavarotti in 1998, and reprising her earlier classical rendition of “Nessun Dorma” from Puccini’s “Turandot.” She filled in for the ailing tenor miraculously after hearing a tape of the song twice. As her brother said, “Aretha could recall and replay a song after only hearing it once.”

When several years ago she was diagnosed with pancreatic cancer, she faced this news with a quiet and private resolve, unlike the outpouring of grief when she heard about Whitney Houston’s and Don Cornelius’ deaths. The success she had in music had no equivalence in her love life, with two failed marriages and a coterie of lovers in her wake. In the end, except for her four sons and several nieces and nephews, she was alone—her siblings, Cecil, Erma, Vaughn and Carolyn were dead. She was now the matriarch of this distinguished family who had made its mark in so many unsurpassable ways, particularly in the church, in music and in the Civil Rights Movement.

There are numerous ways to remember Franklin beyond the magical voice, and of course we can always retrieve and relive our moments with her music. (One of my faves is her version of “Skylark,” and you can find it and other songs on YouTube.)

But to Franklin’s incomparable legend and legacy add her social and political consciousness, her concern that African-American musicians be represented at her concerts and recordings, that the bereaved be cared for and assisted, that we never neglect the homeless and the needy and that each of us find that humanitarian part of our soul that figured so forcefully and magnificently in her life.