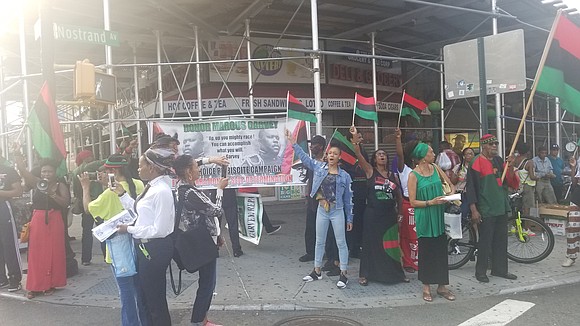 Friday, Aug. 17, 2018, Harlem and Brooklyn were amongst the communities that commemorated the 131st anniversary of the birth of Marcus Mosiah Garvey—the internationally known and respected Pan-African freedom fighter who raised the red, black and green flag and declared, “Up you mighty people, you can accomplish what you will.”

All across the globe, people of the African Diaspora from sea to shining sea, who are activists, grassroots people, politicians and educators have heeded the call and spread the word of self-determination and self-reliance.

In Brooklyn's “Do-or-Die—Not Gentrify” Bed-Stuy, the December 12th Movement and Campaign to Stop Ethnic Cleansing, rallied and marched under the Black liberation flag from Nostrand Avenue and Fulton Street (Harriet Tubman Boulevard) down to Marcus Garvey Boulevard, in the “spirit of resistance and self-determination that Marcus Garvey taught us must be echoed in our streets. The demand to end the sanctions against Zimbabwe, reparations and separation from this predatory system are on the agenda.” In Harlem the Afrikan Nationalist Pioneer Movement marched from Marcus Garvey Park and down 125th Street, to celebrate the life and legacy the man who brought the world the Black Star Line, and a vision to build for self as an African people.