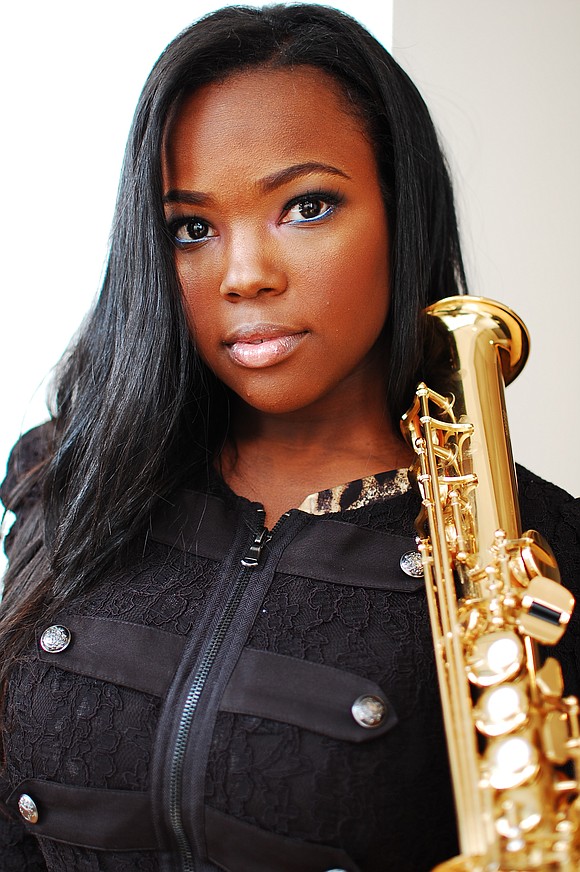 Camille Thurman was the second place winner of the Sarah Vaughan Vocal Competition, but the rising composer, tenor saxophonist and flutist assured me the brass instrument is her first love.

She swings in the tradition of a hard-bopper, a tenor sax that flourishes with rhythmic tones run the scale without hesitation to venture on like the flurried winds of an escalating thunderstorm. After the sax, she can sing sweet ballads such as “Detour Ahead” or “Sassy’s Blues,” an all-scat tune as she did on her last CD, “Inside The Moment: Live at the Rockwood Music Hall,” her debut on Chesky Records.

Aug. 30 (tonight) the multitalented young musician will appear for one night only at Dizzy’s Club Coca-Cola (60th Street and Broadway) for two shows at 7:30 p.m. and 9:30 p.m.

Tonight, she celebrates the release of her brand-new album, “Waiting for the Sunrise” (Chesky Records). Thurman noted, most of the tunes are from the CD, such as “Easy to Love,” “September in the Rain,” and “Tarde,” with a few originals or standards mixed in.

“One of the tracks is called ‘The World Is Waiting for the Sunrise,’” said Thurman, “The process of the sun rising is dynamic, powerful and beautiful. It’s the critical point in time of nature transitioning from dusk to dawn. It’s also a sign of hope and renewal.”

“I grew up listening to Sarah, Ella, Carmen and Shirley and wanted to create a project paying homage to them and revisiting the classics they covered,” wrote Thurman in our text Q&A. “But in a unique way, a new generation continuing their legacy.”

Tonight come and catch the light as her star shines a little brighter. For reservations visit the website https://www.jazz.org/dizzys/month/.

Onaje Allan Gumbs the pianist, composer and arranger received critical acclaim for his CDs “That Special Part of Me” (1988), “Dare to Dream” (1991) and “Remember Their Innocence” (Ejano 2006).

Sept. 1 the pianist, who plays everything from hard bop to soul with distinction will be a part of the Banana Puddin jazz concert series as they celebrate The Onaje Allan Gumbs Birthday Concert. The jazz throw down takes place at the Nuyorican Poets Cafe (236 E. Third St.) on Manhattan’s Lower East Side at 9:30 p.m.

Gumbs contributed to the albums of Norman Connors: “Dark of Light,” “Love from the Sun,” “Saturday Night Special” and “You Are My Starship” (Gumbs arranged and played keyboards on the tune “Betcha By Golly Wow”).

Gumbs suffered a stroke in 2010. Miraculously, he stayed in the hospital for only two days. Any visible signs of the stroke has since vanished. In February 2015, Gumbs suffered another medical setback. Although he was hospitalized for two weeks, he recovered and was able to return to work doing what he does best, composing, arranging and playing piano.

Sept. 6, Rome Neal’s Banana Puddin’ series continues at the Nuyorican Poets Café, presenting the screening of the must-see documentary, “King of Stage: The Woodie King Jr. Story” at 6 p.m. This film offers viewers an inside look at the significance of a producer on and off Broadway. As one of America’s master theater producers, Woodie King Jr. reflects on his now historical role as the founder and producing director of the New Federal Theatre and the National Black Touring Circuit in New York City.

He has presented more than 200 productions in the New Federal Theatre’s 47 seasons, which began in 1970. In addition to producing Broadway shows such as “For Colored Girls Who Have Considered Suicide/When the Rainbow Is Enuf,” “What the Winesellers Buy” and “Checkmates.”

The film includes reflections on his early days in Detroit, working on the Ford Motor Company assembly line, to his fledgling days as a young producer in the motor city. His close friends in the theater world open a window into the history of Black life in the 20th century and highlights his commanding force in the Black Arts Movement.

Many of the young actors, such as Denzel Washington, Glynn Turman, Phylicia Rashad, Morgan Freeman, Samuel L. Jackson and Debbie Allen, who began sprouting their wings in King’s productions have become film and theater icons.

The drummer Charli Persip, a first-call sideman and bandleader, has played with everyone from Randy Weston and Melba Liston to Dizzy Gillespie and Eric Dolphy. Because of Persip’s current health issues, a fundraiser was recently held at Harlem’s Gin Fiz.

Candice Reyes and musician Abel Mireles of the jazz exchange organized the event. Persip, who was present, celebrated his 89th birthday with a large cake and a jazzy version of “Happy Birthday,” sung by his many friends and the house band that included bassist Paul West, trumpeter Rio and saxophonist Ray Blue.

“Charli played on two of my most important recordings, ‘Little Niles’ and the ‘Uhuru Afrika’ album [Roulette, 1961], and he was fantastic on both,” said pianist and friend Randy Weston.

Persip’s big band, Superband, which he formed in the 1980s and has since changed the name to Supersound, also performed. Some of its members include saxophonist Patience Higgins, pianist Louis Parker, trombonists Peter Lyns and Marill Bildsten. Supersound’s first album is titled “Charli Persip and Superband” (Soul Note, 1980).

“Charli is the only drummer I studied under for trap drums,” said Craig Haynes. “He was a great first teacher. I didn’t tell him until later that Roy was my father.”

Persip played on the legendary “Eternal Triangle” recording, “Sonny Side Up” (Verve Records), featuring Sonny Rollins and Sonny Stitt. From 1960 to 1973, he toured as a drummer and conductor with Billy Eckstine.

Along with his performing activities, Persip earned a reputation as an educator. During the 1970s and 1980s, he was the instructor of drums and music for Jazzmobile, Inc. in New York. Until his retirement, he was a faculty member at the New School for Jazz and Contemporary Music in Manhattan.

If you are interested in contributing to this great musician, who has contributed so much to the jazz community, please visit the website gofundme/Charli Persip.