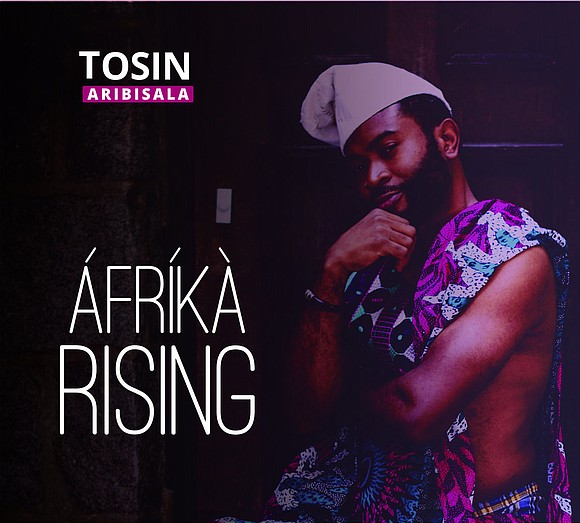 Tosin Aribisala is an up and coming Afro-beat artist who is something of an ambassador for the music and how it unites and educates people at the same time.

“I actually met the editor of Amsterdam News at a tribute event in Apollo for Aretha Franklin,” said Aribisala. “I was paying respect to her. Aretha Franklin was an icon back in Nigeria. A lot of people celebrated her when they heard the news of her passing. She inspired so many people, including myself.”

Making his own mark as a strong Afrobeat artist in the states, Aribisala recently released his album “Afrika Rising” earlier this summer. “Afrika Rising” marks the bandleader’s fourth album. The album includes singles “What Are We gonna do?” and the African version of Pharrell Williams “Happy.”

“I named my album ‘Afrika Rising’ because I was inspired by the younger generation when I was in Nigeria, back in March. Despite of the political, social and economic complications, the youths are fighting back and enhancing their skills. They are making progress in our communities.”

The bandleader is signed with Ropeadope Records. Along with being a percussionist, he also teaches students in the age range of elementary school students to young adults. He is also a vocalist, a music director of African rhapsody and a composer. His music written in is either Yoruba, English or Pidgin English.

Some of his achievements include receiving the Individual Artist Award for Best World Music Compositions from the Maryland State Arts Council in 2014 and 2017, performing at the Percussive Arts Society International Convention and the MTV’s Real World Show.

Born and raised in Nigeria, Aribisala grew up listening to various genres of music from his father’s album collection, including Afro-beat. He first started to play the hand drums in church, and then he started to play with other percussion instruments. But ever since he was introduced to the Western drum set, he said he has not turned back to the hand drum.

“Afro-beats is quite diverse,” he continued. “I grew up listening to artists like Fela Kuti. When Fela first came out, his music was heavy influenced by jazz. He reached a point where he started to use other genres in his music. And I was so amazed of his talent. He was a true African man. He had songs that have a message. A message that really supports the idea of a prospering community and family. As a strong African man, Fela and other artist like him, paved the way for future Afro-beats artists.”