Amid some tough losses, the Nets might find some winners on their bench 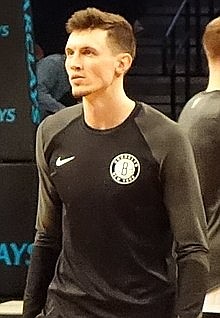 When the Brooklyn Nets hosted the Oklahoma Thunder last night (Wednesday) fronted by Russell Westbrook and Paul George, and host the Toronto Raptors with Kawhi Leonard and Kyle Lowry tomorrow night, not only were they facing two of the league’s upper echelon teams with several of the league’s most upper echelon players, and a back-to-back against the New York Knicks in Manhattan Saturday night, but also the Nets struggled with a mounting 7-game losing streak, 8 out of 9 game losses, 11 out of their last 13.

Brooklyn’s last win took place Nov. 20 against the Heat in Miami. Their last home win was an impressive blowout of the Philadelphia 76ers, 122-97, Nov. 4.

“We couldn’t overcome our shooting,” explained Nets head coach Kenny Atkinson. “I think they were the better team, and they deserved the win.” Brooklyn made a valiant comeback at the end after being outplayed in key points in the game, losing it to the Cavs in the final seconds 99-97.

Rodions Kurucs was an important part of that comeback as was pointed out by Atkinson. He was one of the positives of the night.

Atkinson noted, “He turned the game for us, and got us back in it. His energy was contagious.”

Kurucs dropped 12 points, a season-high with 4 rebounds and 1 steal in his 14 minutes off the bench.

“He can help us. He can shoot it,” noted D’Angelo Russell after scoring 30 points along with his 8 rebounds and 6 assists on Cleveland. “Plays hard,” is how he further described Kurucs.

Kurucs, 6-foot-9, 210 pounds, is from Latvia. He turns 21 in February. Brooklyn drafted him in June with their second-round 40th pick. He had previously played with Barcelona until being drafted. Against the Knicks, Brooklyn’s second game of the season, Kurucs scored 11 points, 5 rebounds in 17 minutes and 12 points, 5 rebounds in 15 minutes against the Indiana Pacers, the team’s third regular season game.

“To have a young player like that contribute at this level, this early is good news,” said Atkinson..

“My role on the team is to help the team, to help the guys, to bring energy, so that’s what I’m trying to do every game—help them,” said the rookie.

Critiquing his play, Kurucs stated, “I just played tough, and that’s it, every game. If I go on the court, I play tough. I use my minutes.”

His productive use of his minutes has gotten him consideration for more. “He’s in the conversation, you can’t deny it. We’ll have to look at it,” said Atkinson. “I think he’s shown that he can do it.”