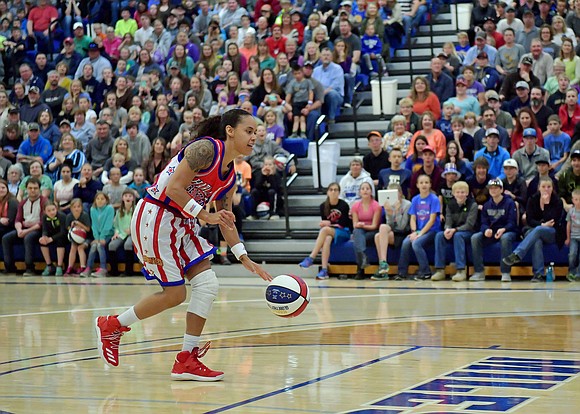 Briana Green always appreciated basketball players with flashy moves, such as Allen Iverson and Kobe Bryant. Although she definitely spent time studying videos and practicing intricate dibbling and behind-the-back passes, the 5-foot-9 guard knew she also had to develop solid fundamentals. Those basketball skills took her through college at the University of Texas-El Paso and into the pro game in Spain and the Czech Republic, where she got to unleash some flash.

With those hoop dreams fulfilled, Green in now fully embracing her passion as a member of the Harlem Globetrotters since 2017—just the 15th woman to don the red, white and blue uniform that embodies show basketball. She has an injury to thank for the opportunity. A knee injury brought Green home from Europe, and she couldn’t decide whether she wanted to continue playing pro ball.

“I was still in my knee brace and I happened to post a video of me dribbling on Facebook, and the video went viral,” said Green. “Everybody was tagging the Globetrotters. A recruiter saw it and invited me to the tryouts and I made the team.”

Learning how to blend her competitive instinct with being an entertainer was a challenge at first. Green considers herself an introvert. “Once I put on my uniform, I have an alter-ego,” she said. “Get out of your comfort zone and entertain.”

Now known as “Hoops,” Green recently showed off her skills during halftime at a New York Knicks game. The Globetrotters also played games at the Garden and at Barclays Center last month and return to both arenas in late December to take on the Washington Generals. They’ve also made appearances at schools in New York City, such as Capital Preparatory Harlem School, to discuss the Globetrotters’ bullying prevention program. There are also hospital visits.

Growing up in Kentucky, Green and her father would volunteer at a homeless shelter twice a week. “I’ve always tried to be active in the community,” said Green. “Globetrotters are the ambassadors of goodwill and we’re really involved. That’s important to me. It makes the Globetrotters even more interesting.”

She elaborated, “We love interacting with kids and families and putting smiles on people’s faces. We feed off their energy.”

Green grew up playing one-on-one with her brother, so she feels in her element on a team with guys. “I can hang with them,” she said. “I’m having a great time doing this.”