With the playoffs out of reach, Giants pursue a winning culture 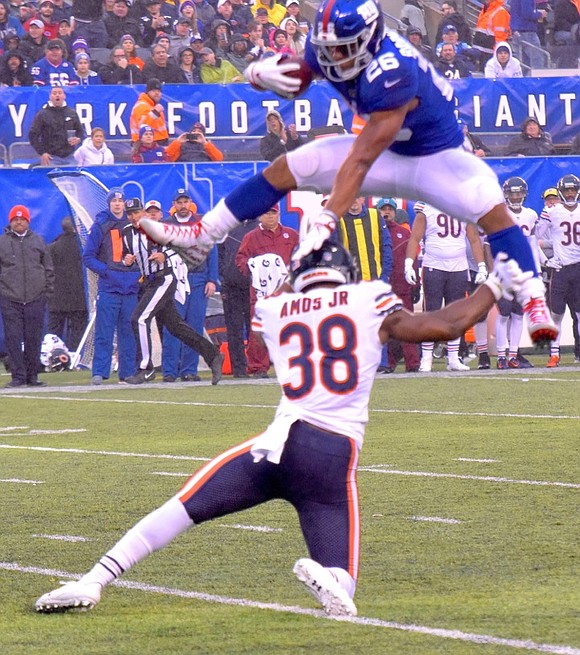 The Giants’ fleeting opportunity to remain in the NFC playoff chase came to a crashing halt two weekends ago in Philadelphia, where they lost to the Eagles 25-22. It was one of the more frustrating defeats in recent memory for Giants fans to reconcile, given the team’s improbable emergence as a contender for the division after a 1-7 start.

Their short-lived good fortune was more of a result of a weak division, in which the Dallas Cowboys, the Washington Redskins and the Philadelphia Eagles were all conclusively flawed. The Cowboys and the Redskins were just above .500 at 6-5, and the Eagles were 4-6. Two straight wins put the Giants at 3-7, and a victory over the Eagles would have thrust them back into the postseason mix.

Now it’s all could have, should have, would have for the 4-8 Giants after their 30-27 overtime win over the NFC North leading Chicago Bears (8-4) this past Sunday at MetLife Stadium. With four games remaining on their schedule, including the season finale at home Dec. 30 versus Dallas, a matchup that will likely have playoff implications for the now 7-5 first-place Cowboys, the Giants are continuing to work on building a winning foundation to carry into next season.

However, maintaining the trust and faith of their fan base will be an ongoing challenge as the Giants are on course to be on the outside of the postseason for the sixth time in the past seven seasons.

“It’s tough,” said Giants wide receiver Odell Beckham Jr. in the team’s locker room Sunday regarding the fans’ perspective of the future. “That’s something that comes from inside the person that wants to believe.”

“I can try to put all of the belief that I can speak, but words can only do so much,” said Giants head coach Pat Shurmur. “It has to be in your heart to have hope for us, to believe in us to do any of those things.”

He commended his players after the win against the Bears saying, “There’s probably plenty of takeaways … but toughness and resiliency are demanded in our sport, and we have that. We’ve just got to clean up the mistakes and keep going. That’s why I’m proud of our guys.”

Shurmur credited linebacker Alec Ogletree, who had two interceptions versus the Bears, one for a touchdown, his best game as a Giant since being acquired via a trade last March with the Los Angeles Rams. As a leader, he is helping to transform the team’s culture. Ogletree said it is core principles that will ultimately translate into success.

“Just to be a professional, prepare well and do the right things,” Ogletree said. “It means taking what you have learned in the classroom to the field. Like I said, things are going to be tough sometimes, and you have to be able to keep fighting there and keep standing there and do your job at the highest level that you can. When you do that, it definitely changes the culture around here, and it gets guys around here to play well.”

The Giants will make an effort to embody Ogletree’s wisdom when they face 6-6 Washington on the road Sunday.