Remember the Titans—The Jets will for quite some time 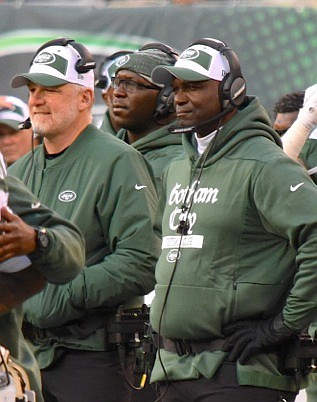 The New York Jets didn’t just lose to the Tennessee Titans Sunday 26-22, accumulating 11 game penalties resulting in 96 negative yards, they blew a 16-point lead to do so.

Jets head coach Todd Bowles summed it up best. He said, “Dumb mistakes at dumb times cost us ballgames, and that’s why we’re in the position we’re in.”

The Jets are in last place with a 3-9 record and a six-game losing streak—a team again struggling to find the path to postseason play.

The Jets were also done in by their inability to score a touchdown, compiling five field goals by kicker Jason Myers.

“You can’t do that,” Jets QB Josh McCown said. “You’ve got to get seven points when you’re down there, and we didn’t do that.”

Tennessee made adjustments at halftime. The Jets might have. They scored two of their five field goals in the third quarter, but the Titans scored a touchdown before they completely shut the Jets down offensively 13-0 in the final quarter of the game.

Special teams and some defense brought the Jets a modicum of salvation. Cornerback Trumaine Johnson’s interception in the first quarter, a 31-yard pick 6, was the Jets’ first take away in six games. They also sacked opposing quarterback Marcus Mariota three times.

The Jets’ last opportunity to win the game was thwarted with a downfield interception thrown by McCown with 21 seconds left on the game clock, securing the game for the Titans. It was McCown’s third start off the bench filling in for rookie starter Sam Darnold, out because of a foot injury.

The Jets travel north to play the Buffalo Bills Sunday, back-to-back road games and another team that has caused the Jets some embarrassment this season. Buffalo defeated the Jets four weeks ago in their building 41-10. Another one that they’ll remember for quite some time.

The Houston Texans and the Green Bay Packers, who fired their coach immediately after losing another game Sunday, are next on the Jets’ schedule, Saturday and Sunday, respectively, followed by the New England Patriots to end the year.