‘Blood Brothers’ is about brotherhood—and love 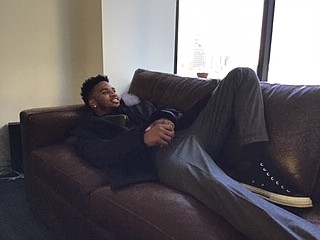 Trey Songz was recently in town to promote his starring role in the new indie film “Blood Brothers.” Packed with blood-pumping action, “Blood Brothers” is the story of an ex-con who takes up a vendetta against childhood friends who he believes let him take the fall for a crime they committed together. One of the friends, now a cop, risks his life to stop him. Along with Songz is actor Jack Kesy (“Deadpool 2”), China Anne McClain (“Black Lightning”), Hassan Johnson (“The Wire”) and Tanee McCall (“Burlesque”), and introducing top-selling music artist Fetty Wap.

The world knows him as Trey Songz, but his birth name is Tremaine Aldon Neverson. He’s young (mid-30s) and is building a strong legacy as a singer, songwriter, record producer, rapper and actor. He burst into the music world in 2005 with his debut album, “I Gotta Make It,” and he kept racking up hits, nominations and awards. His third album, “Ready” (2009), and the single “Say Aah,” peaked at No. 9 on the Billboard Hot 100, making it Songz’s first top 10 hit. “Ready” was nominated for Best Male R&B Vocal Performance at the 2008 Grammy Awards. More hits followed, and in 2014, his sixth studio album, “Trigga,” promoted the top 40 songs “Na Na” and “Slow Motion.” He has sold more than 25 million records worldwide in singles and albums.

Nov. 28, he dropped a pair of new mixtapes in honor of his 34th birthday—11 and 28 both hit streaming services without any type of warning from the artist.

I caught up with Songz at his publicist’s office. We conducted the interview while he reclined—relaxed and happy—to talk about music, French bulldogs and what made him want to step into the role of Sonny in the indie film “Blood Brothers.”

Here is what musician/actor Songz had to say about, well—life.

AmNews: Thank you. I am doing great. Thank you for asking.

Songz: Should I sit up?

AmNews: Absolutely not. Relax. Let’s chop it up. In your opinion, what’s the underpinning theme of “Blood Brothers?”

Songz: Brotherhood, definitely. You know as much violence as there is in the movie, it’s actually about love. My character [Sonny] has to make a lot of hard decisions because of love. I think that he has loyalty to things he doesn’t really understand. There comes a time when a friendship has to play a back seat to family. [Sometimes] you have friends that want to pull you into directions that you don’t want to go. And there comes a time when the debt is paid, as well.

AmNews: I also understand that you worked with an acting coach? So you take the art form seriously?

Songz: Absolutely true and yes, I do. I had the acting coach come down [to New Orleans] and we worked out, for hours every day. Just her and I. Then [later] we would meet with the director. I wanted to be well prepared.

AmNews: What do you love about acting?

Songz: That I can do it forever.

AmNews: You shot “Blood Brothers” in New Orleans. Did anything creepy happen? The city does have a supernatural history.

Songz: No, but I was there during Mardi Gras, and where I was staying was the exact location for all of the bands to start [the parade]. I woke up and it was like 400 musicians warming up. I walk outside and there are school buses everywhere, and there are school children everywhere. I’m half asleep and everyone is turned the opposite way. Then I grabbed my dog and I ran. Drums, horns, everything for two weeks. Early in the morning until late at night, surreal. I wasn’t even mad. I was just like, “Wow, I am living in the heartbeat of the city.”

Songz: (laughing) Oh, I just dropped a couple of mixtapes on my birthday!