Momoa is marvelous as ‘Aquaman’ 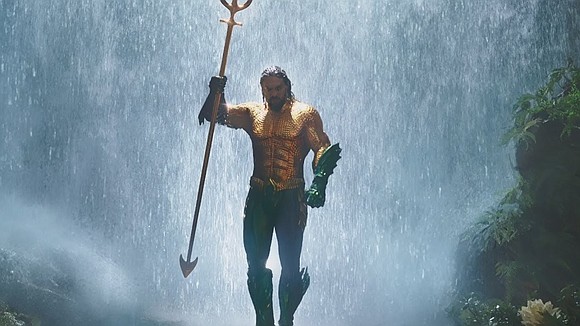 Jason Momoa is perfect in the new DC franchise action film, “Aquaman.” It’s being hailed by finicky critics as one of the best superhero movies of the year and may well be the future of the DC franchise. Under director James Wan (“Furious 7”) the potential for a mega-successful franchise is pretty might in the bag.

Wan tossed aside the Aryan-looking Atlantean and replaced the superhero of the sea with a chiseled, bare-chested Hawaiian Adonis with long, “surfer dude” hair and impressive body tattoos that reflect his tribal background.

DC Comics cleverly unveiled Aquaman last year in “Justice League.” According to reports, this year unveiled no fewer than 12 superhero features, ranging from “Avengers: Infinity War” to “The Lego Batman Movie,” which proves, I think, there is no shortage of interest in above-average characters fighting the longest battle in the history of mankind, which is good versus evil.

It’s almost comical if it weren’t tragically true, but human beings treat water and those animals that live in it like garbage—literally. It’s crazy, because a human being is made up of mostly water, and we require it or we die.

In the film, the water dwellers (descendants of the lost city of Atlantis) have a strong dislike of land dwellers for all of the reasons listed above. Our Aquaman is a half-breed born of a human and a sea dweller, a queen (Nicole Kidman) who ran away from her world after being forced into an arranged marriage. She gives birth to a son, Arthur, who later becomes Aquaman, who can breathe underwater, swim really, really fast and communicate with sea creatures.

The story is simple. Aquaman—as in all solid hero journeys—at first rejects returning to the deep-sea kingdom that banished his mother to “the trench,” although she escaped by living on land and falling in love with a human lighthouse keeper (Temuera Morrison). Aquaman is royalty and is trained, in secret, by Vulko, the royal counselor who coaches him on how to use his underwater powers.

Smartly, director Wan takes us into the underwater world quickly, expanding on the mythology of Atlantis, which was once the most advanced civilization on Earth until greed and a powerful weapon destroyed it, sinking it to the bottom of the sea. It’s all eye candy for the viewer. The production designers have outdone themselves.

War is brewing between the sea dwellers who want to stop the population and destruction of their home, and it’s Arthur, we are told, who could bring the conflicting sea-people together. Like all good dramas and much like the history of the world itself, there is distrust and growing tensions between the seven sea kingdoms. Stirring the pot is Aquaman’s half-brother, the movie’s villain, a pure-Atlantean, Orm (Patrick Wilson), who has secretly enlisted a dangerous pirate (Yahya Abdul-Mateen II, playing the secondary villain) to help him stop his big brother.

Momoa is an example of inspired casting. A “Baywatch” alum who toiled at the gym, a lot, before stepping into “Game of Thrones,” which relaunched his career.

Another element that makes this film so entertaining is the presence of a strong, female warrior, Mera, princess of Xebel (Amber Heard), who teams up with Aquaman and actually saves his life on several occasions. In fact, when it comes time to get to the meat of the story—finding the lost trident of Atlan—she’s the first to jump out of a plane without a parachute.

Another familiar element in all good dramas: Aquaman is torn about defending a people who banished and killed his mother. The film really heats up with the journey from the scorching desert, the Kingdom of the Deserters, deep in the Sahara, to the depths of the dark ocean to find the Hidden Sea that is located at Earth’s core, with our heroes solving riddles and facing ravenous monsters at every turn.

The film delivers an epic deep-sea battle that is nail-biting and great! Translation: it’s worth the price of the ticket.