‘Spider-Man: Into the Spider-Verse’—a brilliant reboot 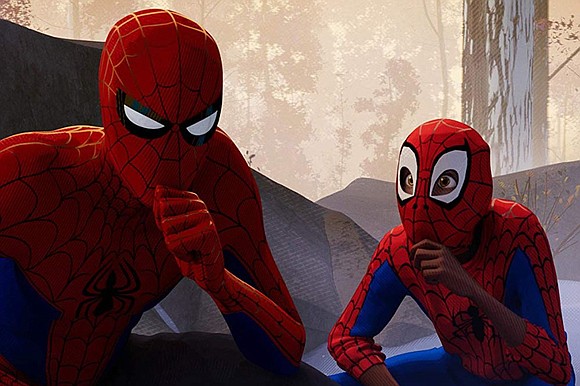 “Spider-Man: Into the Spider-Verse” is a brilliant reboot of a now-beyond classic character from the Marvel universe. The film was directed by Bob Persichetti, Peter Ramsey and Rodney Rothman at Sony Pictures Animation, and their fresh perspective of a half dozen parallel-universe Spideys is entertainment with a side of thought.

“The Lego Movie” mad genius duo of Phil Lord and Christopher Miller serve as producers. This film just might win a Best Picture under the animation category and many other awards that salute the artistry of the “Spider-Verse” retro look of four-color process printing to its 3D computer-animated characters. The effect is the bomb, like an urban landscape where artists let their inner Roy Lichtenstein out to play, with a serious head-bobbing, foot-tapping hip-hop score. Lord and co-writer Rothman shine the proverbial spotlight on Peter Parker and his successor, Miles Morales, the teenage son of an African-American cop and a Puerto Rican nurse.

A quick Marvel fact: the character of Miles Morales appeared in 2011 as a way to diversify the Marvel universe. He’s a handsome, stylish lad in his modified black-and-red Spidey suit. He’s got all of the same power—speed, strength, web-slinging, wall crawling and his heightened “spidey’” sense, plus he’s been upgraded with the ability to shock his foes (venom strike) and he can become invisible, a neat trick when he’s under pressure. The new p.o.v. in this film is that anybody can be Spider-Man.

These creative folks got it right! It’s laid out in a pop-culture, uber-savvy comedic package. Sony has crafted a franchise machine with a potentially unlimited number of spinoff projects; side note, some smart executive is getting a raise and sizable pay bump!

Miles (voiced by Shameik Moore) follows his uncle Aaron (Mahershala Ali) down a dubious subway tunnel. Then the very next day, bam: at school, he’s dealing with all the same symptoms Peter Parker did after the spider took a sizable bite. The transformation is messing with his potential love life with Gwen Stacy (Hailee Steinfeld), the new girl in school and the first of several alternate-dimension Spideys, which also include a chubby older Peter Parker (Jake Johnson), anime-styled Peni Parker (Kimiko Glenn), a boring black-and-white Spider-Man Noir (Nicolas Cage) and Spider-Ham (John Mulaney).

Returning to the site of the bite, Miles glimpses the “real” Spider-Man chomping it up with a version of the Green Goblin—a scary dude. To his horror, he witnesses his hero unmasked and then murdered, providing the motivation for the shy teen to step into his hero’s suit.

There are new villains voiced by familiar players. Liev Schreiber brings the Kingpin to life, a massive bald-headed goliath with a personal motive for opening a portal to other dimensions. Kathryn Hahn puts her own quirky spin on a mad-scientist type with an unexpected alter ego. Prowler (important in the Spider-Verse storyline) appears cloaked in a purple silhouette with shiny metal claws.

The screenwriting is strong and its wit is one of the best parts of the movie. It’s original and wonderful. There is simply nothing not to like about “Spider-Man: Into the Spider-Verse.”