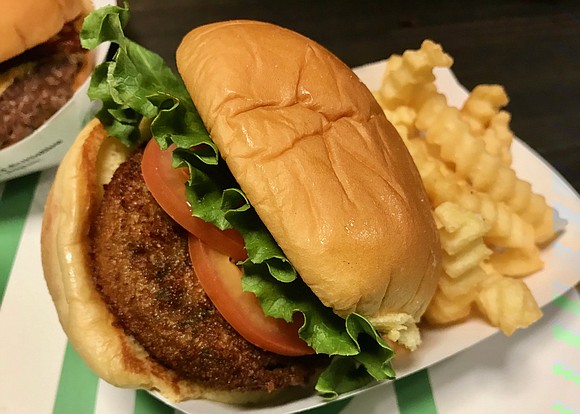 I remember my first Shake Shack burger back in the day in Madison Square Park. So often passing it by as a tourist trap, one day I decided to stand in that line. My patience paid off with a hot pressed cheeseburger and fresh garnish on a potato bun. “McDonald’s who?” was probably my first thought.

Monday night, Shake Shack had a housewarming with music by DJ Stormin’ Norman and a performance by Sing Harlem Choir. The lively and friendly staff passed around copious burgers and fries, birthday cake concretes, chicken nuggets and wine and beer.

Shake Shack Area Director Cassandra Spears spoke with me about what it means for them to be in Harlem. Other than the need to bridge the gap from their 86th street and Yonkers locations, it is their corner pole-position on 125th street. “So many things happen at this corner and we want to be a part of everything that happens in this neighborhood.”

The maestro himself, Danny Meyer, was also in attendance pep-talking the managers and staff and taking video of the moments. I got a chance to chat with him about the differences in opening here versus other locations. His response focused on what is the same. “Whenever we bring Shake Shack anywhere, the goal is that it feels like it’s part of its community, not something imposed upon that community,” said Meyer.

Shake Shack achieves their “sameness” by asking questions and listening to what is needed, hiring locally (80 percent from Harlem and the Bronx), supporting local organizations, commissioning art from local artists and using local purveyors in their specialty foods. The difference? Patience. Whereas Meyer took five years to open their second location (fun fact: Meyer says he was considering Morningside Park to keep the park theme), Harlem has taken more than 10 years and lots of questions and conversations to get to Tuesday’s opening.

I spoke with Jelena Passic, owner of the perennial Harlem Shake, about the new Shack arrival. “This is just a choice between two good things,” said Passic. She acknowledges the competition but said she believes in her product, its cultural impact and the Harlem community who have celebrated Harlem Shake since its beginning.

No matter how many Shake Shacks open, Meyer still gets excited when he hears praise as he did during our interview on the street. His reaction—“That makes me happy. I am getting goosebumps right now!” And in the end, Meyer reminded me, what is the same no matter the business, “you just gotta open your doors and see if people actually want to come.”