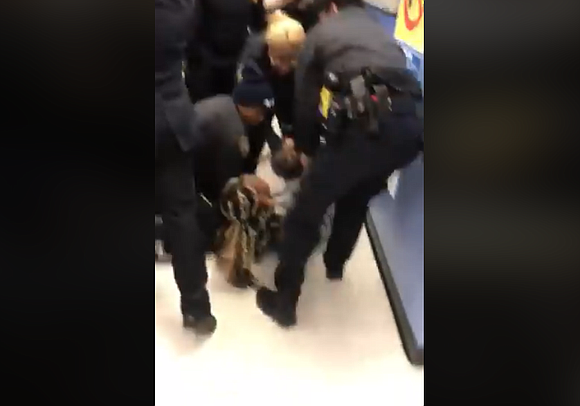 Teamsters 237 President Greg Floyd has called on New York City Mayor Bill de Blasio to rescind the suspension of two of his constituents involved in the arrest of Jazmine Headley.

Dec. 7, Headley was removed from the Human Resources Administration building at 275 Bergen St. in Brooklyn after allegedly denying requests to stand up after sitting on the floor while waiting in line. HRA security officers called for the help of the New York Police Department after various attempts to make Headley stand failed. Although the officers involved said Headley behaved “belligerently,” the public saw a video of HRA and NYPD officers holding Headley down while snatching her 1-year-old son, Damone, from her arms.

The video went viral and aroused the ire of elected officials such as New York City Council Speaker Corey Johnson, City Council Majority Leader Laurie Cumbo and police reform activists. However, the only people who suffered any repercussions in the aftermath were HRA Sergeant Toyin Ramos-Williams and officer Bettina Barnett-Weeks. Both were suspended for 30 days by the city for their role in the incident. The entire agency was also ordered to be retrained in the same de-escalation tactics the NYPD uses.

No matter the outcry, the fact that the HRA officers were the only ones suspended left Floyd unhappy.

“Suspending Sergeant Ramos-Williams and officer Barnett-Weekes is an arbitrary and capricious abuse of power,” wrote Floyd in a letter addressed to de Blasio. “The officers were simply doing their jobs in resolving a difficult situation, and there is no justification whatsoever for disciplining them. The suspensions are no more than a transparent overreaction to the negative media coverage that arose because you took five days to issue a public statement regarding the incident.” A representative for Floyd also noted that HRA officers don’t carry guns or Tasers.

The AmNews attempted to contact the mayor for his response to Floyd’s letter and didn’t get an answer before press time, but de Blasio did call for an investigation into the incident last week.

The aftermath of the incident saw denouncements from Johnson and Cumbo, who both claimed that the officers’ actions were “draconian.”

“The disturbing video of New York Police Department officers arresting Jazmine Headley and prying her son from her arms speaks for itself,” said Johnson in a statement. “However, the problems with this incident are hardly isolated to the NYPD. It is unacceptable that Human Resources Administration has such little capacity to handle its core functions that folks seeking their assistance must sit on the floor with their children while waiting for an appointment. Furthermore, none of this would have happened had HRA security officers handled the situation appropriately from the outset.”

“What happened to Jazmine Headley and her child is an absolute TRAVESTY!!!!” added Cumbo on Twitter. “I cannot even begin to express the pain I feel as a fellow Black mother bearing witness to the clear racism and criminalization of poverty that occurred.”

The AmNews attempted to contact the NYPD and the Patrolmen’s Benevolent Association for comment and didn’t get a response. The AmNews wanted to know if they were advocating for the rescinding of the HRA officers’ suspensions because their members weren’t disciplined at all. Although the AmNews didn’t get any answers, PBA President Patrick Lynch did send a letter to Speaker Johnson accusing him of engaging in “dangerous demagoguery” against the NYPD and jumping to conclusions without getting the full story behind the incident.

Lynch wrote, “This is a baseless condemnation of New York City police officers has a dangerous impact: it encourages New Yorkers to mistrust and disrespect members of the NYPD, undermining the critical relationships we depend on the protect our city.”

With elected officials and activists looking for answers in the incident that went viral and outraged people, the city pointed toward two HRA officers involved in the incident. It took several days for the mayor to comment publicly, and the unions behind NYPD officers have pushed back against being held accountable for the Headley incident. HRA officers have taken the fall and Floyd wants to make sure that they get treated fairly.

“Special officers work hard to serve the citizens of this city every day under very challenging conditions and despite chronic understaffing and disregard by your administration,” wrote Floyd. “They deserve your support, not to be scapegoats in a public relations ploy.”