Christmas celebrated across the city 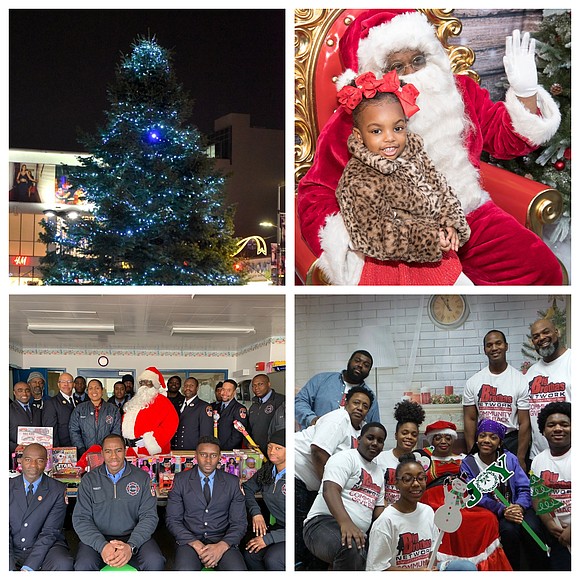 The spirit of the holiday is being felt across the city as people come together to celebrate the Christmas season with food, family, friends and good cheer. There is also a sense of giving back as many people in the community volunteer their time to help others.

Christmas at the National Action Network

The Rev. Al Sharpton's National Action Network (NAN) is hosting its annual Christmas event at its House of Justice headquarters in Harlem on Christmas Day from 11 a.m. to 3 p.m. NAN is feeding the community and giving out toys to children. Local elected officials and community leaders will also be on hand.

LaGuardia Gateway Partners -the operator and developer of LaGuardia’s Terminal B, Community Board 3, and The Port Authority of New York and New Jersey held their annual holiday caroling performances at Terminal B, featuring elementary school children from the local Queens community. There were also several performances throughout this month.

Big Brothers Network (BBN) hosted a holiday event at the Newark YMCA Emergency Housing unit. The organization hosted 86 children this year that were treated to an evening of Christmas arts and crafts, pizza and cupcakes. Each child was also able to Mrs. Claus, took pictures and received a toy donated from ShopRite Grocery Stores. This year BBN officially named their volunteers “The Chazz Logan Volunteer Elf Brigade” in memory of late member Chazz Logan.

Mayor Ras J. Baraka, Public Safety Director Anthony F. Ambrose, and Chief of Police Darnell Henry will held a press conference featuring six-year old shooting victim Liya Khalid Williams and Santa Claus to kick off the distribution of more than 30,000 donated toys in Newark. On July 4 of this year, Liya was shot in the area of Treacy and Avon Avenues while walking with her father and siblings after watching fireworks at Nat Turner Park. She sustained a non-life threatening gunshot injury and was transported to University Hospital, where she was treated and released. Liya will be one of the first, among other invited youngsters, to choose gifts from the donated stockpile. The remaining toys will be randomly distributed to Newark children throughout the city by police and firefighters as well as to children who will spend Christmas in area hospitals.

Jet donates to organizations in Harlem and the Bronx

Online retailer Jet donated a variety of items to organizations in the Bronx and Harlem. All deliveries were made via Parcel, Jet’s last mile delivery service, with Jet employees on hand to assist with the drop off. The company donated backpacks to PS154 in the Bronx and Trinity Place Shelter in Harlem.

Council Member Andy King, in partnership with the Bronx Youth Empowerment Program (YEP) and RiverBay Corporation, hosted a holiday party for more than 600 youngsters and their families in the Northeast Bronx on Christmas Eve. The 13th annual "Sharing is Caring" holiday event will included games, face painting, food, and Santa giving out toys and overall camaraderie for youth ages 5-18.