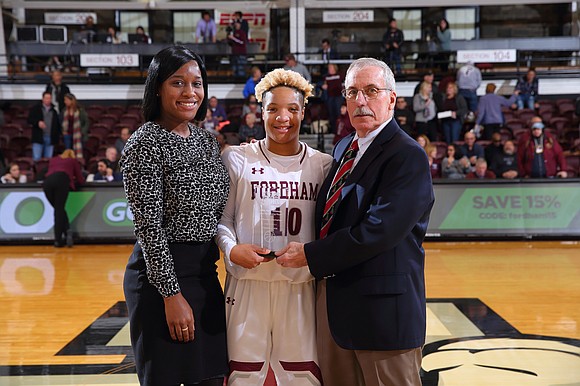 Fordham University women’s basketball coach Stephanie Gaitley is pleased with how the Rams have played thus far this season. The pre- conference schedule has been quite demanding as the players have settled into a new dynamic after the graduation of G’mrice Davis, the team’s leading rebounder and second lead- ing scorer.

“If you play too easy of a schedule, you can never see your warts,” said Gaitley. “We’ve been able to identify some areas we need to improve on, and I think we’re getting better as the season progresses.”

Fordham has played against big name teams, such as Penn State, Georgetown and Texas, and gotten a feel for how big, fast and strong top teams are.

The team’s leading offensive player is redshirt sophomore guard Bre Cavanaugh, who is averaging 19.1 points, 6 rebounds, 2 assists and 1.8 steals a game. “Bre continues to be a work in progress,” said Gaitley. “She’s still not there yet as far as understand- ing the importance of being consistent defensively, but she’s definitely improved...She’s shown she can be a very solid rebounder if she makes the effort to attack the ball.”

Moving forward, Gaitley said team chemistry is strong. The players respect and like each other-a much sought after combination-and share the ball very effectively. They are willing to work hard to get better.

Now in her eighth season at Fordham, Gaitley recently notched her 150th Rams win. She’s not one to dwell on records, but it is a reminder of the collective effort involved in achieving that milestone. “It’s a group effort and a team effort,” said Gaitley.

During this time between semesters, players are engaged in community service, called the Ram 24 Program, until spring semester starts. This weekend, Fordham is hosting the Fordham Holiday Classic with Maine, Chattanooga and Middle Tennessee State coming to the Bronx. Atlantic 10 Conference play begins Jan. 5.