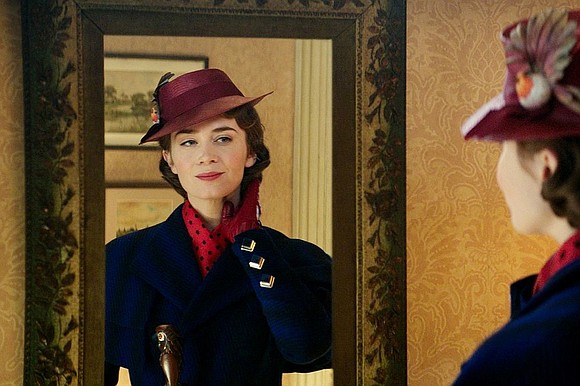 The one and only Mary Poppins in back with actress Emily Blunt in the lead role. She’s perfectly cast and “Mary Poppins Returns” is a solid choice for holiday family entertainment.

In 1964 “Mary Poppins” first introduced the magical nanny-from-heaven, and “Mary Poppins Returns” is a sequel that is set 30 years after the first film and has all the charm as the original.

Directed by Rob Marshall, this musical is a festive, feel-good film from frame to frame, complete with cobblestone streets of London and smooth dance numbers. From the opening moments, when Lin-Manuel Miranda, who plays Jack, the cockney lamplighter, raises his huge eyes and sings “Underneath the Lovely London Sky,” you will find yourself falling into another world—one filled with nostalgia.

This emotional film is filled with sweetness and light.

Here’s the plot. Michael Banks (Ben Whishaw), the small boy from “Mary Poppins,” is now all grown up with three children of his own. He’s lost his wife, we learn, as he stands in the attic of the Banks townhouse singing “A Conversation” (addressed to her). This scene is lump-in-the-throat storytelling.

The key is the magical nanny, and when she glides down from the clouds, she’s the picture of perfection. She’s an angel with a strong disciplinarian disposition and a free spirit who believes in the power of the imagination.

The story is wonderfully simple. Michael is an aspiring artist but toiling as a bank teller while raising his kids with the help of his sister, Jane (Emily Mortimer). He discovers that the Banks house is about to be repossessed if he can’t pay back a loan in five days. His only hope is to find the lost record of the bank shares his father (Colin Firth) gave him.

Mary Poppins’ musical numbers are wonderfully infectious. And when she initiates the Banks children into the world of imagination by inviting them to dive into the bathtub and out the other side, the adventure gets rolling. When she, Jack and the kids surface on their mother’s cracked decorative bowl, which is the opening of an updated version of the live-action-meets-drawn-cartoon sequence of “Mary Poppins”—joyful perfection!

The songs are updated from 1964 but still retain the same type of comfort and ebullience that “A Spoonful of Sugar” has. When the family arrives in animation land, the fast-moving tongue-twisting song “The Royal Doulton Music Hall” is the film’s modern twist on the fun of “Supercalifragilisticexpialidocious.”

Meryl Streep makes an appearance as Mary’s cousin and sings a song called “Turning Turtle”—it’s comical. A holiday film that will quickly become a new, classic, “Mary Poppins Returns” is a great choice for your holiday family adventures.