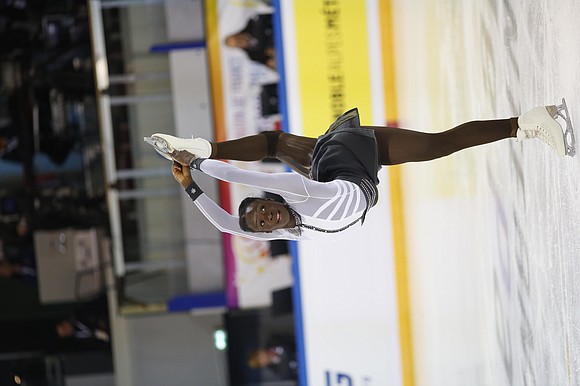 It went down to the wire for French ladies’ figure skating champion Maé-Bérénice Méité, whose participation in the Olympic Winter Games was only confirmed last Thursday. Despite winning her fourth French title in December, she had to place higher than another French skater at the European Champions and then wait another few days for the decision from the French Olympic Committee. With her spot secured she made final preparations, and then headed to South Korea Tuesday.

“This year was a really big challenge for me as last year I wasn’t the top female skater in France,” said Méité, 23. “I have no solution but to bounce back and come back stronger. These Olympics mean a lot to me. To represent France for the second time is a real honor and privilege.”

Méité placed 10th at the 2014 Olympics in Sochi, Russia. With the Games once every four years, only a select few athletes get to compete. Regardless of placement, she is an Olympian for life, but she said it’s a time when an athlete wants to exceed expectations.

“You know everybody all around the world are watching,” said Méité, who has trained in Chicago in previous years, but preferred to stay in Europe this season to cut down on travel time. “You always want to give your best, but at this time you want to be ‘wow.’ We wanted to show my creativity and sensitivity in my free skate program.”

The Olympic Channel has a video in which Méité’s body and musculature are measured and analyzed. “We show the world that we’re not only meant to be beautiful on the ice, but it takes a lot of physical work to be a figure skater,” she said.

Méité will skate in both the team event, which leads off the Olympic figure skating competition, and in the ladies’ competition. She and French teammate, pairs skater Vanessa James, were the only Black female figure skaters in 2014 and likely will be again.

“It’s something I really care about because there are not that many Black girls in the figure skating international scene,” Méité said. “I can show the girls that no matter where you come from, no matter what your skin color is, as long as you dream big and know what you want, you can achieve it. We care about what you do on the ice, your performance. Enjoy what you’re doing and the magic will happen.”