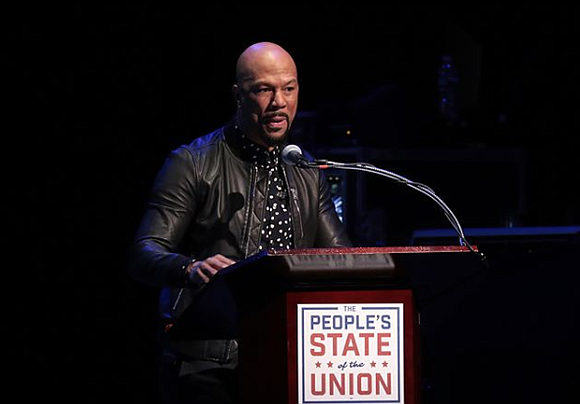 From the words on their T-shirts to their speeches, known and not so well-known speakers hewed to a theme of resistance and get out the vote Tuesday evening at the People’s State of Union at Town Hall. A cross section of activists and entertainers, for three hours, hammered away at the Trump administration, calling for a “new wave of democracy.”

“We are wide-awake,” declared actor Mark Ruffalo in his opening remarks, his shirt emblazoned with “We are all Dreamers.” Decency begets decency, he said, after lambasting Trump and his golden toilet. Ruffalo surrendered the mic to representatives of Indigenous Rights, whose leader offered a prayer in his native Onondaga tongue and then stepped aside for his wife, Betty Lyons, to deliver a rousing speech on the history of democracy that began in upstate New York with the Iroquois Confederacy. “And women were in back of this,” Lyons said, picking up on the women’s narrative that resounded throughout the event.

Mayor Bill de Blasio was not a scheduled speaker, but he stopped by and briefly declared, “The State of the Union is people are fired up!” to a mixed, rather lukewarm response.

The crowd’s response was much louder for comedian Kathy Najimy, and she kept it going with her comment that Trump “says he’s not a feminist” and giving voice to her shirt that proclaimed “Time’s Up!” She also reported that the movement, in a short period of time, had raised $20 million.

“Vive La Resistance” were the words on Paola Mendoza’s shirt, and she explained that the route to change flows through love and “showing up to vote…and we must vote for the undocumented.” She remarked that approximately 14 million Latinos didn’t vote in the last election. Those votes, she said, could be “a brown tsunami” if they turned out.

“We must vote for people who see us,” Common said in the middle of his rap and his charge that “I live for the people.” Later he would join singer Audra Day in their version of “Stand Up for Something,” from the movie “Marshall.”

“We are building Black political power,” Dejuana Thompson told the audience, citing the important role Black women played in Sen. Doug Jones’ victory in Alabama. “We are creating our own agenda.” “America,” comedian John Leguizamo began, “is the best country ever stolen.” Taking time from his Broadway appearance in “Latin History of Morons,” he dispensed his anti-Trump dialogue, noting that “this president makes me long for Ronald Reagan.”

Actresses Rosie Perez and Cynthia Nixon raised their voices for the union movement. Perez said she was a proud member and stated, “The cavalry is not coming to our rescue—we are the cavalry.”

Musical interludes came from Fisher Stevens on his harmonica and Rufus Wainwright and his poignant rendition of Leonard Cohen’s “Hallelujah.”

But the loudest, most sustained speech came from Michael Moore, and he touched on each of the topics by speakers who preceded him, including his praise for women of color and the need to get to the polls. “November 6 is the most important date on the calendar—not your birthday, not marriage day…but Nov. 6,” he repeated.

Given the turnout and the reaction to the speakers, maybe Ruffalo’s remarks about the gathering being the “creation of the mother of all movements,” will gain some traction as Nov. 6 looms on the horizon.