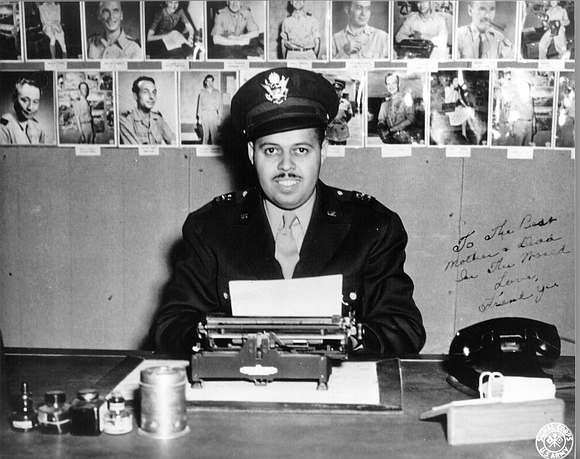 Next time you’re in Pittsburgh, set aside some time to visit the Senator John Heinz History Center. During a recent presentation there for the Smithsonian Channel (the center is connected with the Smithsonian), I toured all six floors of this splendid collection of Americana, including a gallery where an African-American exhibit seduced me. Among the things on display was a tenor saxophone that belonged to the late Stanley Turrentine, a Tussaud-like wax semblance of the great pianist/composer Mary Lou Williams at the piano and a nearby section devoted to the illustrious Tuskegee Airmen.

Across from the Tuskegee Airmen was a large wax statue of reporter Frank Bolden, dressed in a military uniform and facing a typewriter, symbolizing his time as a war correspondent. Later at the function in the center, I was introduced to Nancy Bolden, Frank’s widow, and she confirmed and embellished the information about her husband accompanying the tribute to him.

“Frank died in 2003,” Nancy Bolden said after being asked about her husband, “and naturally I’m quite proud of what the museum has done here to honor him, because he represents a number of the reporters at the Pittsburgh Courier and what they have done to preserve our historical and cultural legacy.”

A good portion of Bolden’s life and legacy resonates in Mark Whitaker’s book “Smoketown,” and Nancy Bolden applauded his work. “He was here last week at the center, though I had met him before when he was working on the book about his parents who lived here,” she said. “I think he did a good job capturing some of the people who were important in the city’s history.”

And Whitaker was wise to give hundreds of words to Bolden’s place in this history because he was, according to his widow and other residents, a veritable walking, talking encyclopedia of Pittsburgh’s history, Black and white.

Frank E. Bolden Jr. was born Dec. 24, 1912, in Washington, Pa. His father was the city’s first African-American mail carrier. Bolden, too, achieved a first as a Black clarinetist in the University of Pittsburgh’s marching band. He graduated from the university in 1934 with a Bachelor of Science degree. While at the school, he also began as a stringer at the Courier.

But, at the time, journalism was not his ambition. His dream was to become a doctor, but despite his good grades he was rejected by the college’s medical school because of his race. Race was also the reason he was turned down for a teaching position in the public school system.

He was advised to go down South if he wanted to teach, but, as he later told a reporter, “I was not going South behind the Cotton Curtain.”

Instead, he signed on at the Courier as an assignment reporter.

Mainly his beat was on Wylie Avenue, one of the Black community’s major thoroughfares. Assigning him to this street, with its vibrant nightclubs, bars and other good and bad elements of a thriving community, was throwing Bolden, like Br’er Rabbit, into the briar patch.

The former musician was right at home spending time with a host of jazz immortals, such as Billy Eckstine, Sarah Vaughan, Earl Hines, Count Basie, Errol Garner, Mary Lou Williams and Billy Strayhorn. Many of these greats were featured in his column “Orchestra Swirl.”

Also on the street and his beat was the bustling life of the “nocturnal sisterhood,” his term for the sex workers in the neighborhood. He was among the reporters at the paper who covered the Negro Leagues baseball, with profiles of the entrepreneur Gus Greenlee, owner of the Pittsburgh Crawfords team, and the renowned Satchel Paige and Josh Gibson.

With the outbreak of World War II, Bolden, rather than putting his fingers on a trigger, hit the keys of a typewriter and became one of two African-American war correspondents. The sweltering, vermin-infested jungles of Burman were a long way from Wylie Avenue, but Bolden brought the same intrepid dedication in his coverage of the troops there, particularly those deployed to build the famous Burma Road. His stories captured the challenge the Black soldiers faced on the job and on racial hostility. There was a continuing series of stories combating the negative reports on African-American soldiers and their alleged cowardice.

Bolden seemed to be everywhere in the military, and at one time was even the house guest of the Indian leaders Mahatma Gandhi and Jawaharlal Nehru, both of whom enthusiastically assured the reporter of their support for the Black civil rights struggle. Other notables who agreed to answer Bolden’s questions were President Roosevelt, Winston Churchill and Josef Stalin.

After the war, Bolden was back on his beat and his column (turning down jobs at major mainstream publications), and was an editor between 1956 and 1960 at the paper. Among his chief concerns at the paper was to increase the presence of African-Americans on the police force, especially in the city’s Hill District. He also wanted them to be promoted beyond just pounding a beat. On this crusade, he gained a measure of success.

If Bolden was warm and considerate to young reporters—and one of his innovations at the paper was the Junior Courier—he was known to be tough on his colleagues, pushing them to the brink of their talents. Phyll Garland, one of his protégés and later a noted journalist and teacher, said that Bolden rode his writers, “prodding them to do better” and often urging them on with the charge that they were terrible reporters.

In the early ’60s when the Courier was financially troubled, Bolden departed for New York City and for a brief spell worked at The New York Times before joining NBC-radio and NBC-TV, and then, for a year, 1962-63, was employed on the “Huntley-Brinkley Report.”

He received wide recognition for his coverage of the Republican National Convention in San Francisco in 1964, and he earned a coup and a sizable bonus for his bathtub-side interview with presidential candidate Barry Goldwater.

“I didn’t know [newspapers] hired you people,” Bolden said Goldwater told him. “He was a bigot through and through.”

Later, Bolden was back in Pittsburgh, where he was assistant director of information and community relations for the city’s board of education, a position he held for 17 years. Along with this task, he served on the African-American advisory committee of the Historical Society of Western Pennsylvania and subsequently was honored for his volunteer work with Cerebral Palsy Institute, and Family Services of Western Pennsylvania and the Early Learning Institute, a nonprofit agency serving special needs children.

Bolden was often known to extend his appreciation of the Courier, saying without the paper there “would be no Bolden,” but to a great extent the opposite was true, without Bolden there would have been no Courier.