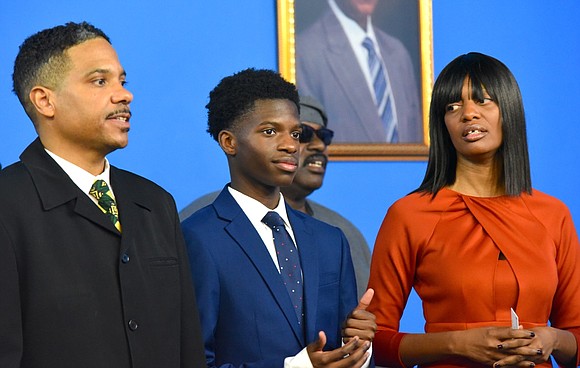 Malcolm X (El-Hajj Malik El-Shabazz) is once more a teaching moment, particularly for school officials at Christ the King High School in Queens.

When the school’s honor student, Malcolm Xavier Combs, shortened his name to “Malcolm X” to place on his senior sweater, he was told by assistant principal Veronica Arbitello his request was denied.

“I was called down to the office,” Combs said, explaining his situation to the audience assembled Saturday at the National Action Network. “She told me that I couldn’t put my name on the sweater. She told me that I didn’t want to be associated with that name.” She asked Combs if that was his real name, and then when her husband, Joseph Arbitello, the school’s basketball coach, entered the office, she told him, “This is the new Malcolm X.” Both laughed.

“I was silent and in shock by all this,” Combs continued. “This really hurt me because I was just trying to represent Malcolm X because that was my name.”

Combs was joined at the podium by his father and mother, Mychelle, who expressed her outrage and elaborated on what her son had endured.

“I would like to thank the Rev. Al Sharpton and Rev. Kevin McCall for taking on this cause for us because if they hadn’t stood up for us this situation would have been swept under the rug like so many other similar incidents,” she said. She added that the school officials wanted to keep the entire issue internal and claimed that the Combs’ brought in the media.

“Well,” she said, “Christ the King you made this a media issue.”

Actually, the story first broke in the Daily News after the Rev. McCall, NAN’s crisis manager, responded to the family’s call. When Ilyasah Shabazz, one of Malcolm X’s daughters, heard about the situation she was invited to meet Combs and support his quest.

“They named their son after Malcolm, so their son would have a life of promise” Shabazz said. “Isn’t that what we all want for our children? …Young Malcolm Xavier, this experience reminds me of when Malcolm Little was told by a teacher what he should and should not be…The good news is this is a pivotal moment, an [opportunity] to speak out against anyone who attempts to minimize you and the people’s legacy you share.”

Shabazz added, “And teachers, we don’t blame you, but we invite you in being curious beyond the books that are put in front of you about the greatness of each of the children whose fragile lives you hold in your hands. … The time is now to require that educators receive cultural sensitivity training and diverse role models who celebrate intellectual activist like Malcolm X and others from diverse cultures.”

After her stirring speech Shabazz presented Combs with a T-shirt emblazoned with an “X” and one he proudly embraced.

“No educational institution has the right to defy the wishes of parents on how they name their children,” the Rev. Sharpton said, accentuating some of Shabazz’s comments. “We’re in a day you fight to keep Confederate statues up, yet you want to use a school teacher to defy what a mother and father want to name their child. We are not going to stand by and let that be swept under the rug.”

“If you name your school after Christ the King, you need to examine why Christ is king,” he said. “Christ came for people like Malcolm who were broken … and said you can be born again. You need to live up to the name. … The youth didn’t have the wrong name. Maybe you’re not living up the name you have.”

Malcolm X lives! This time as a young honor student.

The Rev. McCall also discussed another school, P.S. 224 in the Bronx, where a teacher, Mercedes Liriano, was told she could not teach planned Black history lessons. Her lesson plans included a lecture on Frederick Douglass and the Harlem Renaissance. According to the school’s principal, the lessons Liriano planned to teach were not part of the state curriculum.

“That’s strange, since I’ve been teaching these courses for 17 years,” Liriano told the audience at NAN. Concerned parents have expressed their support in rallies at the school, and the Rev. McCall said that NAN will be joining the future protests at the school