Will the Giants forge ahead with Eli or a new, young QB? 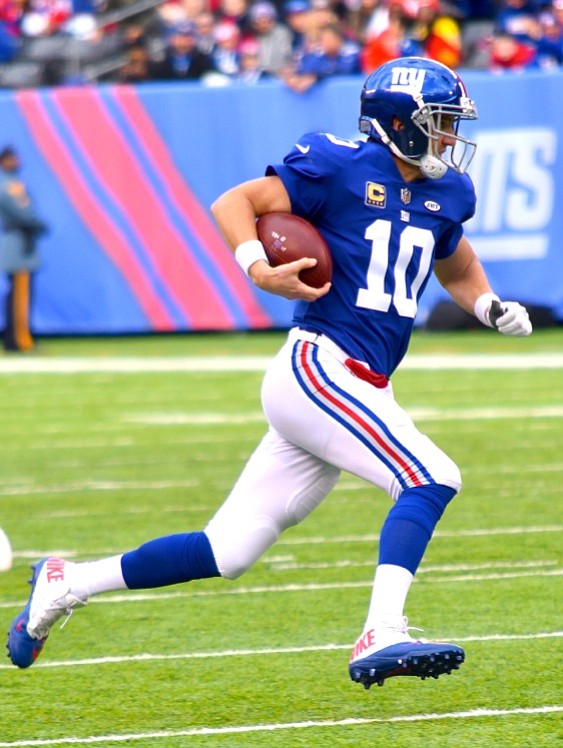 Over the next 11 weeks, the Giants will be mulling decisions that could affect the franchise for the next 10-plus years. They currently hold the second pick in the first round of the NFL Draft, which will take place April 26.

Giants ownership, first-year general manager Dave Gettleman, who was a member of the Giants’ pro personnel department from 1999 through 2012 before becoming the Carolina Panthers’ general manager, and newly hired head coach Pat Shurmur will have to determine if they will use the pick to draft Eli Manning’s successor, groom 23-year-old Davis Webb, the team’s 2017 third-round pick, to take over as the starting quarterback in the next year or so or maintain the status quo and build a solid offensive line in front of the 37-year-old Manning and construct an effective running attack.

At his introductory news conference late last month, Shurmur took the politically correct approach when first asked about Manning, who has been the Giants’ starter since 2004. “Well, first off, I think the relationship is going to be very strong,” said the 52-year-old Shurmur, a former Cleveland Browns head coach and last season the offensive coordinator for the Minnesota Vikings. “I’ve watched him, competed against him, admired how he’s played over the years. Got to spend some time with him this summer in the Manning Academy setting. I’ve already spoken to him on the phone and he’s an outstanding football player, and I can’t wait to get to work with him. I’ve admired the way he’s handled things. I sort of like a calm approach to the position. Looking forward to getting to work with him.”

Shurmur elaborated when further questioned about Manning’s impending status with the franchise. “I think those are all questions for down the road. I’m sure we’ll talk about that up until the draft. You know, I watched Eli throw a little bit this summer, and I walked away saying, ‘He looked really, really good.’ He looked fit. He was throwing the ball well. The ball had good velocity coming off his hand. And again, I think he’s got years left. How much, I don’t know. But I think he has time left, and I look forward to working with him.”

Shurmur added, “With regard to who we’re going to draft, you know, I’m not ducking that question. I think that we’ve got to travel down that road of evaluation to see what happens there. But I think what’s important is we have a guy here that’s helped this organization win Super Bowls. He’s an outstanding player, and I’m really looking forward to working with him.”

It isn’t often the Giants have drafted as high as No. 2. If they do as well this year as they did in 1981, when the franchise selected Lawrence Taylor, its greatest player of all time, with the second pick, whether it’s a quarterback or not, everyone, fans included, will be pleased.