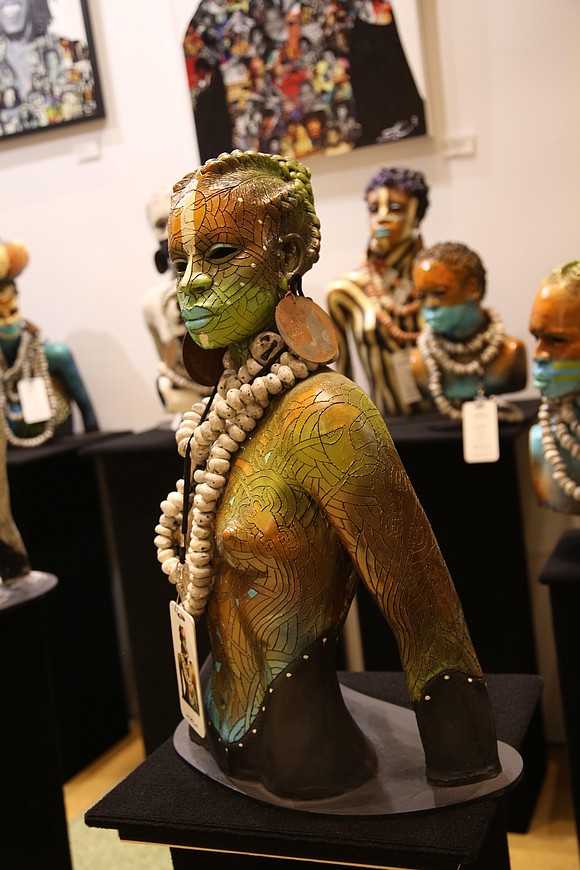 Rushing from the stage to get to his shift at Kings County Hospital, Dr. Robert Gore still made the time to speak briefly to the Amsterdam News about the connection between art and medicine. Gore is co-founder of the Kings Against Violence Initiative, a critically lauded program that seeks in part to inculcate its young participants with the idea that violence is not a solution for conflict.

Reflecting on the events of the evening as well as current events nationally, Gore remarked, “There is a major creative component to medicine. You must be able to do things that are not traditional, so I incorporate a lot of the creative elements. Also, artists take in everything going on within the community. They are very visual, but they also understand the soul of what’s happening, and I think that contributes to the core values that a lot of us want to implement within our own medical practice.”

The occasion was opening night of the ninth annual Harlem Fine Arts Show that took place at its New York City home, the historic Riverside Church. The Harlem Fine Arts Show also has annual iterations at Martha’s Vineyard, Chicago, White Plains and Washington, D.C. The theme of the multicity tour this year is “The Healing Power of Art.” Throughout the four-day long event, HFAS celebrated African-Americans in the medical field, holding events such as the Black Health Matters Summit, a screening of the Quincy Jones produced short film “Health is the New Wealth,” and a tribute to African-American nurses. Art was on exhibit all four days in the Cloisters, South Hall, and on the ninth floor was a special exhibit of the work of 14 incredible South African artists.

Gore was one of a dozen recipients of awards handed out on opening night that saluted their efforts in medicine. Each recipient was given a piece of art, a framed charcoal rendering of the caduceus from Greek mythology, the familiar winged staff entwined by two coiled serpents. The caduceus has come to be used as a traditional symbol of healing and medicine as often as the original symbol, the rod of Asclepius.

The Harlem Fine Arts Show’s founder, Dion Clarke, who shared MC duties with Eyewitness News anchor Rob Nelson that night, also referenced the unveiling of the portraits of Barack and Michelle Obama, which occurred that same week. Clarke observed, “The synergy of two African-American artists highlighting the president and the White House is so important. It gives us crucial cultural nutrition that stimulates our children as well as benefits the people who have been involved in the struggle. This is great food for thought, this is great ideas and concepts built around art in these times which are so negative. This is a great way to turn that tide.”

Community leader the Rev. Dr. Seretta C. McKnight presented a Lifetime Achievement Award to the Rev. Elaine Flake and the Rev. Dr. Floyd Flake of the Greater Allen A.M.E. Church in Jamaica, Queens, for their lifelong efforts on the behalf of African-Americans. Elaine Flake was honored to have received the award but, in her modesty, indicated she felt the accolades should fall more on the congregation of her church, saying, “The real issue is it’s not just us. It has been the congregation that has been so willing to do extremely wonderful and meaningful things. Allen is a wonderful church that has been so willing to sacrifice and to give. When we’re honored, our church is honored.”