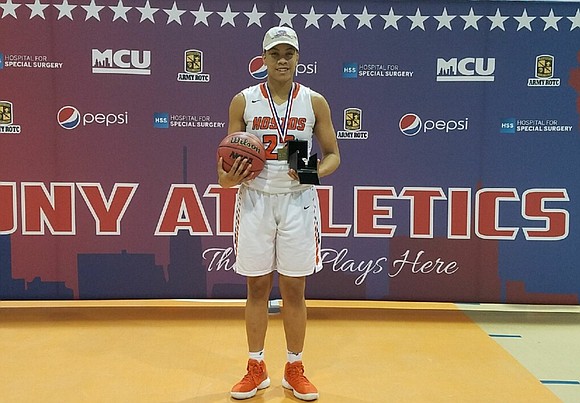 A third quarter run helped Hostos Community College pull away from Borough of Manhattan Community College and go on to win its second consecutive CUNYAC/Army ROTC Women’s Basketball Championship 72-52. In only his third season as head coach at Hostos, DeVernie Winston has built a dynamic program that attracts highly competitive players.

“We were able to limit BMCC’s offensive production with our defense,” said Winston. “In the second half, we changed our defensive style where we went man-to-man and were able to press them a little bit more, get more steals and put the ball in the basket.”

Freshman forward Kayla Wilson was named Tournament MVP. Three days before the championship game, Wilson was named CUNYAC Player of the Year and Winston was named Coach of the Year. The fact of life in community college is players are in and out in two years, so they must adapt quickly to playing the college game.

“My coaching staff does a really good job with recruiting,” said Winston. “We’re able to get some of the best players in the New York City area, which gives us that competitive edge. Every year, it is a new team. We’re blessed to have players that fit our system.”

Winston said the team has a family atmosphere. He’s honest with recruits on how the program is run. Although expectations for are high, players know the program will deliver on its promises. Every player has received attention from a four-year program. Not all have chosen to continue playing, but quite a lot have moved into Division III and II programs.

“They want to step up and play hard, be leaders and do whatever they can for the team,” said Winston. As the father of two daughters, he feels vested in women’s basketball—wanting to see players excel on and off the court.

Although the team receives a great deal of Winston’s attention, it is not his sole job. He is a sign language interpreter and hopes to someday combine his talents by developing a youth basketball program for the deaf in New York City.

With a bye for the quarter-finals, Hostos moves to the NJCAA Region 15 semi-finals in early March as the top seed. The Caimans are hoping to earn a return trip to the Division III NJCAA National Tournament

“It’s a next man up mentality—whatever it takes to get it done,” said Winston.