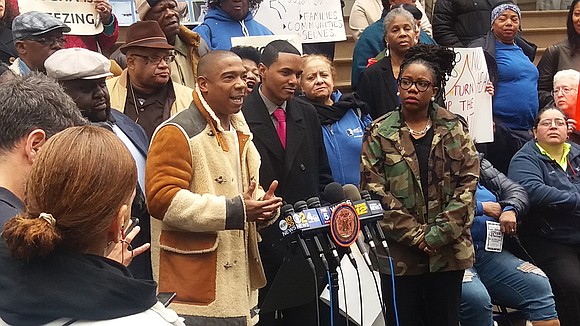 Continuing their fight against the city, NYCHA residents and elected officials gathered on the steps of City Hall Tuesday to voice their sustained outrage over a lack of heat and hot water.

While vowing to join the fight to improve conditions in NYCHA, Ja Rule (born Jeffrey Atkins) said the mayor and governor should be ashamed.

“I’m here to bring light to this situation,” he said. “This has been going on for a long time and it’s time we the people stand up and let our voices be heard. This is our city and we need the residents to come out in droves. New York is living in Third World conditions and it should not be this way.”

Although public housing residents got some relief this week as temperatures in the city reached near 70 degrees, they say they are still dealing with myriad issues, including lead paint, water leaks and mold.

“NYCHA needs more funding, better leadership and it needs greater flexibility around procurement,” Torres said. “The City Council in conversations with the governor’s office about how to best speed up the installation of boilers in public housing.”

Last month, Mayor Bill de Blasio pledged to invest $200 million for 39 boilers in NYCHA in 10 buildings by 2022. However, residents still want the repairs to happen sooner.

In response to Torres’ request, a representative for Gov. Andrew Cuomo called the city’s “mismanagement” of NYCHA “unacceptable.”

“We gave NYCHA an unprecedented $300 million and told the Council that the state stands ready to help in any way they deem appropriate, and even offered a way to improve the management problems with a State Declaration of Emergency to expedite competent, immediate repairs,” Dani Lever, press secretary for Cuomo. said.

In response to Tuesday’s rally, NYCHA shifted the blame toward the White House and President Donald Trump. Reports indicate that Trump wants to cut $6.8 billion from the Department of Housing and Urban Development in fiscal year 2019.  “We hope today’s rally will highlight the catastrophic cuts proposed by the Trump administration and the need to support public housing as a vital resource.” a representative said.  NYCHA resident and President of Douglas Houses Carmen Quinones was also at the rally. She was notable for the powerful speech she made during a public hearing at City Hall earlier this month. In a recent interview with the AmNews, she said she receives at least 25 calls a day from residents in her building about maintenance issues.

“People are crying because they are freezing to death,” she said. “This is a crisis. People are getting sick in these places and dying. Something has to be done. This administration has done nothing to make it better.”

Quinones said that the 5,000 residents living in the 16 buildings of Douglass Houses are dealing with a range of issues, including no heat, broken pipes, lead paint, broken boilers and no water.

“The mayor should be more compassionate,” she said. He has no compassion for the people living in these conditions and it’s just being brushed off. I don’t know why they’re protecting Shola [Olatoye]. She’s being protecting. She needs to leave.”

Ja Rule also suggested that the reason conditions are so bad in NYCHA is because there is a plan to drive out residents and privatize buildings.