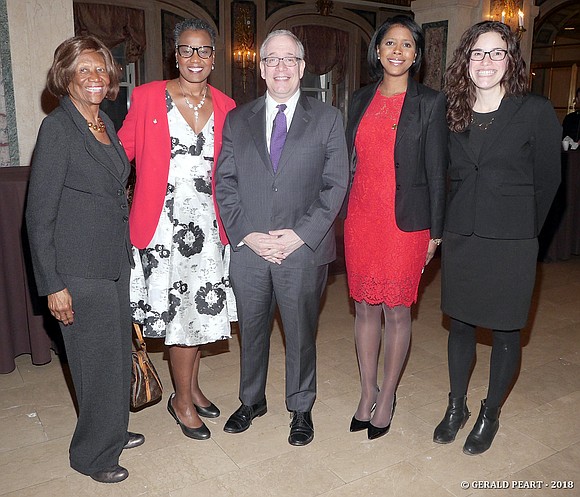 In recognition of the 15th anniversary of this award, the breakfast featured a CEO roundtable discussion. Greg Braca, president and CEO of TD Bank, Philippe Krakowsky, chairman of IPG Mediabrands and Keith Mestrich, president and CEO of Amalgamated Bank participated in this dynamic discussion. The conversation included best practices, moments when the CEOs found that diversity mattered and how they have educated and learned from the boards. The enlightening conversation was facilitated by Lewis.

The NYUL was pleased to present Braca with his corporation’s Champions of Diversity Award for their commitment to their exemplary diversity practices. “I want to thank the New York Urban League for honoring TD Bank, America’s most convenient bank, with a Champion of Diversity Award,” said Braca. “Every day, we are committed to building a safe and productive work environment where every individual feels valued. It’s truly an honor to be among so many great companies with that same level of commitment.”

Most recently TD Bank pledged $10 million to the NYC-managed Emerging Developer Loan Fund, joining Amalgamated and Bank of America, to help more women- and minority-owned businesses have access to critical capital. This year, the NYUL honored Lewis, an individual whose efforts are setting the pace for supplier diversity in corporate board rooms and sports. As global chief diversity officer at McDonald’s, Lewis oversees the development and implementation of diversity and inclusion strategies and community engagement. Previously at Major League Baseball, Lewis oversaw MLB’s Executive Development Program and the Diverse Business Partners Program, the premier supplier diversity program in sports.

“This award exemplifies the importance and impact of the work that I feel blessed and privileged to do,” said Lewis. “Serving two world-class brands that drive economic impact within diverse communities, formerly Major League Baseball and now McDonald’s, is the opportunity of a lifetime.”

The NYUL also bestowed three Champions of Diversity Awards for Exemplary Best Practices. Individuals and their companies who are presented with this award have recognized that diversity is not a one-time hire or creation of affinity groups, but a daily commitment to inclusive best practices. L’Oreal USA, Major League Baseball and Mount Sinai Health System were honored for continuing to champion the cause of diversity, and for their ability to respond to issues of gender and race in real time. Eugene Kelly, vice president, Global Diversity & Inclusion, accepted the Champions of Diversity Award for Colgate-Palmolive. Colgate-Palmolive’s diversity commitment extends to their people working in more than 80 countries providing oral care, personal care, home care and pet nutrition to 200 countries and territories.