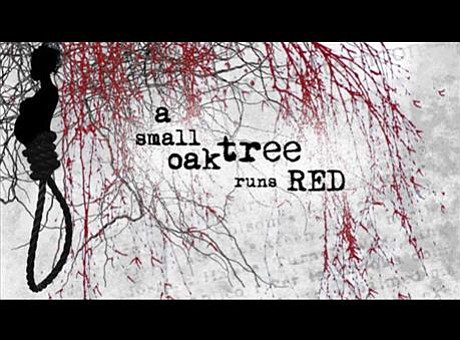 Soul-stirring, take you to school, take you to church theater is happening right now at the Billie Holiday Theatre as it presents “A Small Oak Tree Runs Red.” This play by Lekethia Dalcoe tells the stories of three of the Blacks who were lynched in Valdosta, Ga., in 1918. These individuals are three people whose names are included in a list of 4,000 Blacks who were documented as being lynched between 1877 and 1950 in this country. This play is a brilliant, chilling story that Dalcoe uses to educate our people about the racist hatred that Blacks have faced in this country from whites just because they were Black people.

Dalcoe tells us the story of slaves, Mary Turner, Hayes Turner and the baby of Mary Turner—all lynched. The child is referred to as the baby of Mary Turner because she was eight months pregnant when he was cut out of her lynched, burning body! Yes, that sounds brutal, and the production is full of the brutality that Blacks faced. However, it’s a story that’s true and one we all need to hear to remind us of the horrific history Blacks have had in this country. Especially during the times we face now, when Black lives don’t seem to have equal value to white lives.

Sitting in the audience you feel your emotions being touched, your anger being tapped. Dalcoe chooses to educate us about our history by having murdered slaves in a holding area between their death and heaven. While in this holding area they must remember what happened to them and the hatred and violence they faced that led to their gruesome deaths. Newspaper clippings on ropes hang down as reminders of the past. Black History Month is normally a time when eye-opening and mind-opening and inspiring plays are presented, and this play is definitely proof of that.

The casts is absolutely riveting to watch and includes Kyra Riley as Mary, R.J. Foster as Hayes and Yusef Miller as Sidney. Sidney was a slave with Hayes and Mary who lived with and worked for Hampton, a white, cruel slave master. You see the pure, genuine love Mary and Hayes shared and how their lives were harmed by Hampton. You also learn how Sidney was abused by this vicious slave master. It’s interesting in this play how Blacks are supposed to accept their station in life and just allow the white man to trample on them. It’s also strange how when whites murder it’s fine, but when Blacks turn on their abusers they are criminals. I don’t want to explain more than that because this play is a profound production that must be experienced.

This ensemble cast is superb! You won’t be able to take your eyes off the stage for two hours. During intermission all that was heard were people discussing the intensity of the work and also the important life history and lessons being shared through this production.

The play featured explosively brilliant direction by Harry Lennix. I’ve always viewed the Billie Holiday Theatre as a place families can go to be entertained, but this production takes things much further. It will help to teach audiences much needed history and make you feel outraged about what we have endured through history and sadly remind you of the racism that is still alive and well in this country. You might not have people lynched from trees, but blatant racism and hatred rears its ugly head throughout this country.

I think it was very courageous for Dr. Indira Etwaroo to present this powerful, poignant play at the Billie Holiday. BRAVO! Please take your young people and go see “A Small Oak Tree Runs Red.” It will run through March 4 only.