When will enough be enough 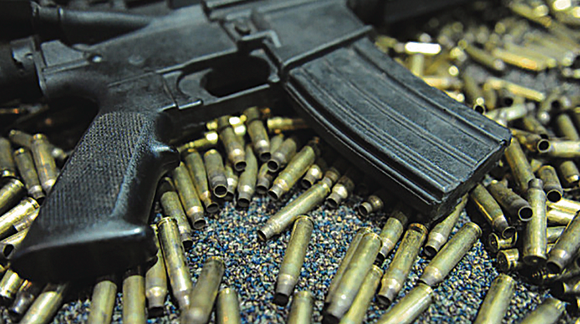 This country must end its obsession with guns. It is becoming more and more apparent that this country cares more about its guns than it does about its citizens. Indeed, the Second Amendment of the Constitution gives Americans the right to bear arms. However, too many American’s believe that it is their right as Americans to arm themselves with machine guns and artillery capable of mass destruction. As we have seen far too many times, these arms have found their way into the hands of unstable and ill-willed individuals who have destroyed innocent lives and uprooted communities and schools. And yet again, elected leaders send thoughts and prayers to the victim’s families, and not enough is done to remove guns from the general population.

My grandfather in rural Florida was a hunter and raised hogs to supplement the family income. I am not saying that no one should own a gun of any sort, and most gun safety advocates aren’t arguing that the government remove guns from circulation, far from it. Many families have fond memories of hunting with loved ones, spending weekends with parents, grandparents and other relatives during their childhood years. However, rifles, shotguns and even handguns are not the same as machine guns that shoot hundreds of bullets in a single minute.

There have been 290 mass shootings since 2013, which is roughly one mass shooting every week for the past five years. Let that sink in. There are now so many mass shootings that most don’t even register on the national news. “There’s nothing we can do” seems to be the motto of the elected officials currently collecting checks from the NRA and succumbing to the whims of their voters who are obsessed with a narrow interpretation of the Second Amendment.

It has not escaped many observers who see the disturbing reality that the perpetrators of almost all of these crimes are white men and boys, but “there’s nothing we can do” about it according to far too many leaders. Even as children die in their classrooms, the president of the United States focuses his obsession on Muslim terrorists, Mexican rapists and criminal Blacks. No other country has so many mass shootings, but until we focus on the root causes of the influx of NRA money, the constant focus on the criminalization of people of color in this country and the willful blindness to the primary perpetrators of these crimes, I fear far too many families will join the grieving communities in Parkland, Sandy Hook, Columbine, Las Vegas and hundreds of other locales in America.

Christina Greer, Ph.D., is the 2018 NYU McSilver Institute Fellow and an Associate professor at Fordham University, the author of “Black Ethnics: Race, Immigration, and the Pursuit of the American Dream” and the host of The Aftermath on Ozy.com. You can find her on Twitter @Dr_CMGreer.