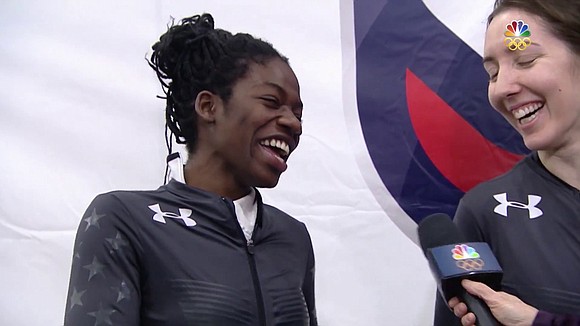 Speed skating, like most Winter Olympic sports, has long been devoid of sizable representation by African-Americans and people of color. Various socio-economic factors, such as the cost of private lessons and access to quality facilities, are paramount.

However, when the 2018 Winter Olympics commence in PyeongChang, South Korea Feb. 9, the United States will have three Black athletes as part of their speed skating contingent. The 35-year-old Shani Davis, a native of Chicago, who was the first African-American to win an individual gold medal at the Winter Olympics, achieved in 2006 in the 1,000-meters at the Turin Games in Italy, will be competing in his fifth straight Olympics.

Jackson is as unlikely an Olympian as anyone who will compete under the U.S. flag. The 25-year-old skater from Ocala, Fla., qualified for the team in 500-meters after only competing in the sport for four months. Her specialty is inline skating, in which she became a world champion in addition to competing in roller derby for the Jacksonville RollerGirls.

“I really wasn’t expecting any of this, just coming in as a newbie, just trying to do the best I can,” she said after clocking 39.04 seconds in the 500-meter race at the U.S. Olympic speed skating trials in Milwaukee last week, finishing third in the event. “I still don’t even know.”

As for Davis, he says his passion for speed skating remains high after two decades of attaining four Olympic medals—two gold—and 27 overall medals in international competitions.

“I still love the sport of speed skating and I always find a challenge in competing,” he posted on the Team USA website, “and trying to be the best I can be. So as long as I have that in me, age doesn’t mean a thing.”