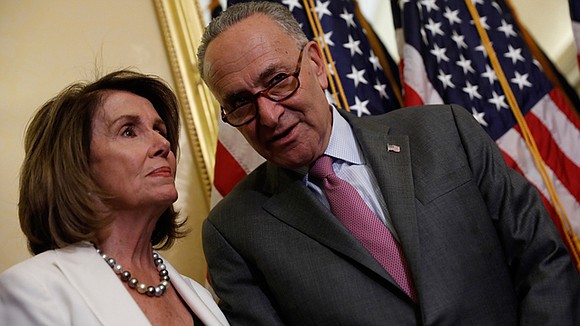 It’s now weeks before DACA runs out on more than 800,000 Dreamers, who are not only students but also teachers, nurses, administrative workers and military officers—all paying taxes and contributing to the economy of these United States. Yet come March 5, they could all face deportation unless Democrats in Congress, led by Chuck Schumer and Nancy Pelosi, take a strong stance against the Republican bullies in the White House and Congress.

Yet so far, neither Schumer nor Pelosi have shown much backbone or real leadership. Both decided they would insist that DACA be a part of the 2017 tax reform bill but wimped out in the end.

And now they seem ready to whimper away again as both have yet to solidly insist that all Democrats unite and not support a deal to fund the government before Jan. 19 if DACA is not included.

In the meantime, while both leaders of the symbolic donkey party whiffed, the dummy-in-chief gathered together Republican senators at Camp David to insist that any DACA deal for these young hardworking immigrants should include funding for his “Berlin Wall,” and the end to chain migration and the green card lottery.

The GOP is also hell-bent on pushing what they call a “clean bill,” to deal with “immigration” so as not to upset the apple cart and trigger a government shutdown. That means kicking the can further down the road as the clock runs out and leaves these Dreamers vulnerable and facing Trump’s ICE men.

Schumer and Pelosi cannot let that happen. If they want to remain as “leaders” of the party, they must show real leadership and stand up even when it looks hard.

If that means shutting down the government for a few days, then so be it! The reality is that if Democrats want to win this year and expect the support of immigrants to do so, then both Schumer and Pelosi would be wise to show some spunk on this issue. Enough with the last century standing at a podium, reading from a paper while looking all botoxed out.

Immigration always has been and continues to be an important issue to the base of immigrant voters who have long supported the Democrats. Now it’s time for Democrats, led by Pelosi and Schumer, to show they actually care.

The 2018 agenda to win back the Senate and the House begins with DACA. It will not be won simply by touting the perceived mental unfitness of the president, his alleged semi-literacy or the fact that he might or might not have colluded with Russia or obstructed justice.

The 2018 election will only be won on issues that matter most to the majority of Americans and Democratic voters, who cringe daily when they think of how El Trumpeto won the presidency and manages to hang on to it still.

It is time for Pelosi and Schumer to show real vision, dynamism and leadership and lay out the agenda for immigrants and all Americans or get out of the way. That begins with taking a strong stance on DACA’s inclusion in the bill to fund the government.