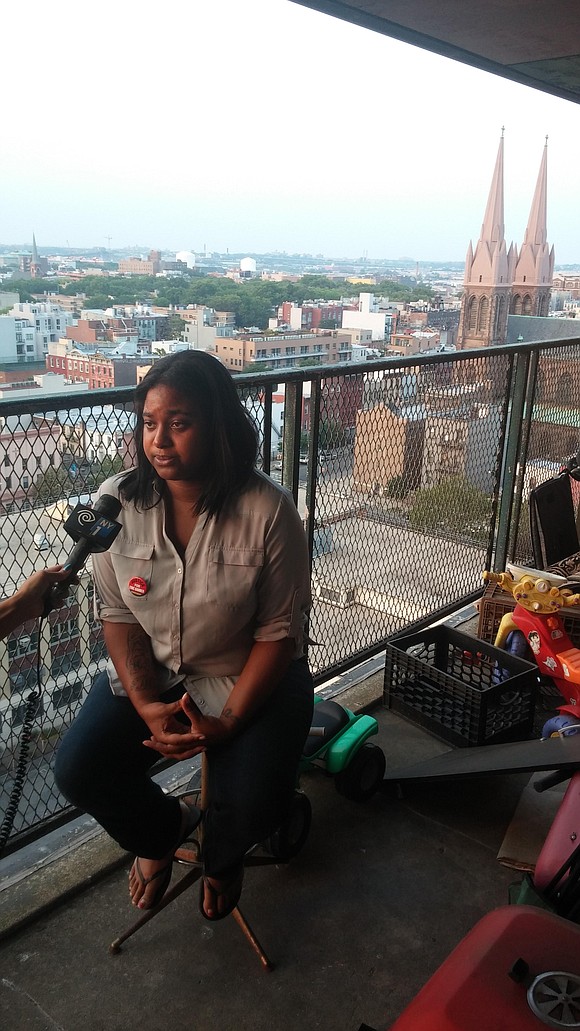 Harlem’s First Corinthians Baptist Church was packed Monday, Jan. 8, 2018, for the wake and funeral service for Erica Garner, 27, the mother-turned-activist who fought for justice for her father Eric Garner until her untimely early end. The whole world saw the 2014 death on video (recorded by Ramsey Orta) at the hands of police officer Daniel Pantaleo, who put Eric, the Staten Island father of five, in a prohibited chokehold soon after bystanders said he had tried to stop a fight on the street.

Garner had an asthma attack Christmas Eve, and reports stated that she was placed in a medically induced coma after a massive heart attack at Woodhull Medical and Mental Health Center in Brooklyn. Surrounded by family, she died Saturday, Dec. 30, 2017.

Esaw Snipes, Eric Garner’s widow, said of her daughter, “She was a warrior...She fought the good fight. This is just the first fight in 27 years she lost.”

During the service, Eric’s final words, “I can’t breathe,” were noted as a phrase that became a Black Lives Matter rallying cry. Both Eric and Erica, father and daughter, were remembered at the services.

Meanwhile, as passions ran high, there was an incident between family members that took place outside the church. Mothers of the Movement, a group made up of women whose children were slain by NYPD officers, and other cops sat together until they were told that Gwen Carr, mother of Eric Garner, was not allowed into the funeral because of an ongoing family dispute. As the mothers left, Kadiatou Diallo (mother of Amadou Diallo) and Hawa Bah (mother of Mohammed Bah) told the AmNews, “We had come to support Gwen and the family at the funeral.”

The Revs. Al Sharpton and Michael Walrond were among the clergy who offered words of comfort to the family, and repeated was the gratitude and admiration for this young woman who rallied, marched, debated and stopped lanes of traffic so that the world would understand that she wanted justice, still elusive, for her father. Her mother commended her child’s defiant warrior spirit and told the congregation that she would be raising her two grandbabies now. The service was both moving and inspiring, with powerful singing and heartfelt sentiment from an emotionally charged gathering.

Walrond said, “Erica was a mother, a daughter and a dedicated warrior who was deeply committed to justice. While we’ll forever grieve the loss of her generosity and her voice, the work does not stop here. We will honor Erica’s legacy through our continued commitment to building a world where Black and Brown bodies are free from the fear of police violence. Pastor Lakeesha Walrond and I send our deepest condolences to the family.”

Council Member Daneek Miller was also present. Calling her the “Black Lives Matter, social and criminal justice reform activist,” Miller said of Garner, “It is especially heartbreaking that this sudden and untimely loss of young Erica comes three years following the day she and her family were denied justice for the reckless chokehold death of her father. Like those from past generations compelled to join the cause after being visited by deadly violence against men and women of color, Erica consistently spoke truth to power regardless of race or party affiliation, and challenged it to acknowledge the fundamental danger systemic racism poses to our society. To the very end, she pursued her work boldly, passionately and with integrity. Our hearts go out to the Garner family, to whom we owe our gratitude for all they have given despite all they have suffered.”

As Pantaleo is still employed by the NYPD, and the family still awaits a decision from the federal government, Sharpton said in a statement, “National Action Network at the request of the mother of Erica Garner, Esaw Garner, helped during Erica’s hospitalization and helped the family with the funeral services to the best of our abilities. We fulfilled the requests made by Erica’s mother Esaw much like we did for Eric’s mother Gwen when doing Eric’s homegoing service. We had nothing to do with lists, as we do not know all the members of the family, and as I stated in my eulogy of Erica, I’m not on either side of a family in a civil rights case. I am on the side of justice. NAN provided what it could in terms of assistance, getting the word out and with having me do the eulogy. All sides remember the warrior spirit of Erica Garner as she fought for justice for her father Eric Garner, and it’s that warrior spirit that should be remembered.”