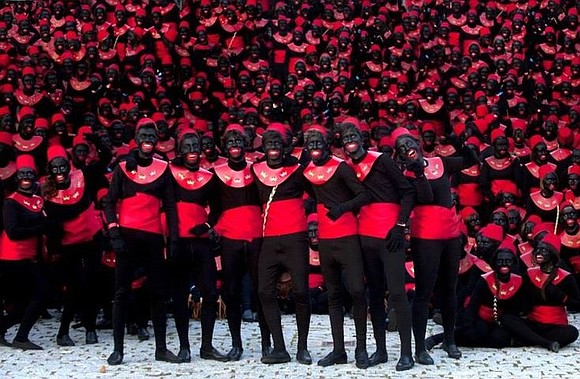 Each year, Alcoy, which is known for maintaining its mixed Arab/Spanish medieval heritage, holds a monthlong Christmas festival featuring a picturesque Nativity scene in its Plaza de España and giant puppets that children can take pictures with.

But the holiday celebrations, which don’t end until the commemoration of the Epiphany, when the Parade of the Three Wise Men moves through town, also maintains a tradition of highlighting white men and women dressed head-to-toe in blackface and with painted on large red lips marching through town and handing out candy and presents to local children.

Blacks in Spain find this part of the Alcoy celebration insulting, and many are now worried about the town’s push to have the United Nations Educational, Scientific and Cultural Organization declare Alcoy’s Three King’s Day Parade a part of the world’s Cultural Heritage of Humanity. “This would be a terrible blow to Spain’s Black community and to Spanish speakers in general,” said Antoinette Torres Soler, founder of the website Afroféminas.com, “and it would take us years to recover from this.”

Caspar, Melchior and Balthazar—the Three Kings, or Wise Men—enter Alcoy as part of a procession that features camels, torchbearers, shepherds, musicians and pageboys. These pageboys, or servants (who are in Spain also called “negrets”), carry with them long ladders so they can climb up to balconies and run to the front doors of houses to deliver children’s presents and candies. Alcoy’s Three King’s Day celebration has been taking place for some 133 years. In Spain, it has already been named a “Fiesta of National Tourist Interest” and part of the nation’s “Intangible Cultural Heritage.” Each year, people scramble to make reservations and travel from across the country to take part in Alcoy’s celebrations.

Afroféminas.com started a campaign to petition local politicians and have them enforce that parade participants not be allowed to march in blackface. Those who march as pageboys don’t have to be painted in blackface or any other color—and they can still hand out gifts to children. So far, Alcoy’s representatives have rejected the petition and say there is no reason to change the parade. Besides, many local Spaniards do not want to see a change in the pageboy tradition, which they claim is not racist and only brings joy to children.

But editors at Afroféminas say that this tradition must be changed, and they are calling for international support in protesting at UNESCO to demand that Alcoy’s Three King’s Day Parade be reformed. “This is offensive,” Afroféminas states in a recent article on their website. “It’s extremely offensive. It offends us because it stereotypes us, ridicules us. It does not include us, and it falsifies our image.

“We are real, we are not characters who are not in the streets of Alcoy and the rest of Spain. You cannot rely on the past to keep from making changes. We are here and it hurts us to see ourselves as a joke without personality, without nuances, without humanization.”

Afroféminas campaign to change the Alcoy Three King’s Day Parade can be found at https://www.osoigo.com/es/acciones/la-cabalgata-de-alcoy-es-racismo.html.