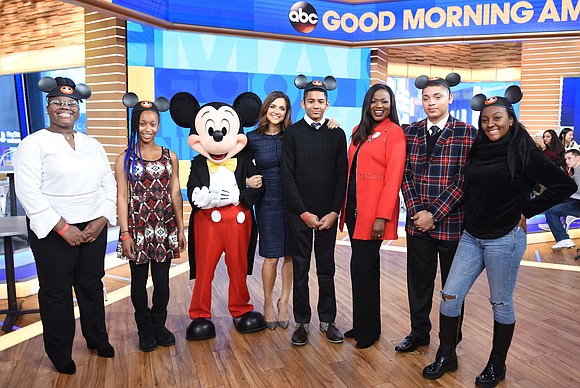 Five high school students were surprised live on “Good Morning America’’ on Monday with the announcement that they were selected to be part of the exclusive Disney Dreamers Academy with Steve Harvey and ESSENCE Magazine.

The students, who were handed T-shirts featuring the program’s new logo during the surprise moment, are among 100 extraordinary youths from across the nation announced by Disney today to participate in its immersive, transformational four-day program, March 8-11, at Walt Disney World Resort in Florida.

Be sure to catch our coverage of the Disney Dreamers Academy from the Walt Disney World Resort in Florida coming in March!

The program, which is entering its 11th year with a new “Be100’’ campaign, highlights Walt Disney World Resort’s continued commitment to the next generation of teens by inspiring them at a critical time in their development to make a difference in their lives and to relentlessly pursue and realize their dreams.

“Each of these 100 girls and boys has proven themselves to be exceptional as students and as human beings, so it’s an honor to have them join us at Walt Disney World Resort,’’ said Tracey D. Powell, Walt Disney World Resort vice president of commercial management - resorts and Disney Dreamers Academy executive champion. “It is our hope that this potentially life-changing program will help create the next generation of great dreamers and achievers.’’

Participating students, known as “Disney Dreamers,” embark on a journey throughout the Disney theme parks and behind the scenes, turning the vacation destination into a vibrant classroom for students to discover new careers, pursue their dreams and interact with Harvey and other motivational speakers and celebrities.

Additionally, students participate in hands-on, immersive career-oriented workshops, ranging from animation to zoology. Each student is given important tools such as effective communication techniques, leadership skills and networking strategies.

“Inspiring our youth to dream big and chase those dreams is a personal mission,” said Harvey. “Having a dream is one of the most important things in life. That is why engaging with these students is an annual highlight for me, and the 2018 Disney Dreamers Academy will be no exception.”

Since 2008, Walt Disney World Resort has provided all-expenses-paid trips to more than 1,000 students, plus a parent or guardian, to participate in the annual Disney Dreamers Academy. The students are selected from thousands of applicants who answered a series of essay questions about their personal stories and dreams for the future.

“At ESSENCE, we are committed to impacting the leaders of tomorrow,” said Michelle Ebanks, president of ESSENCE Communications. “Every year, we continue to be impressed by the exceptional students selected for Disney Dreamers Academy, and it is our privilege to play a role in encouraging them to achieve their goals.’’