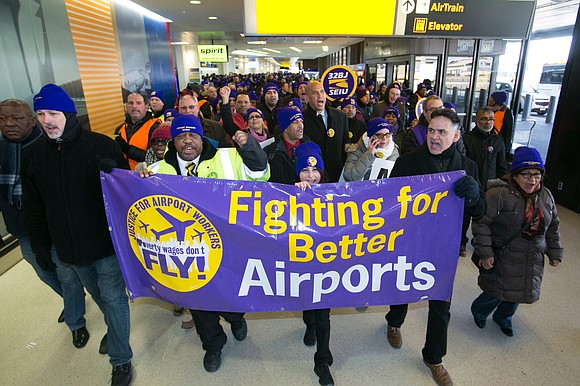 With allies of clergymen and elected officials such as Newark Mayor Ras Baraka and U.S. Sen. Cory Booker in tow, workers marched to demand a safer and better working environment with better wages for workers. The rally was organized by 32BJ SEIU.

“We’re striving for the ability to feed our families, to have a decent wage,” said Angie Pearson, 57, an airport cleaner at John F. Kennedy Airport. “We shouldn’t have to work so hard. Like I’ve said before, I work 80 hours in a 40-hour workweek. This is every month for the past five years since I started working at the airport.”

Pearson said that while her wages have gone up a bit since laws have gone into place at the state level to raise the minimum wage, she wants her union brothers on the other side of the Hudson River to benefit as well.

She explained, “Now, we’re up to $13, but the governor in Jersey didn’t want to give them that. Now the new governor has been sworn in. He promised that he would raise the minimum wage there.” Phil Murphy was sworn in as the new governor of New Jersey Tuesday.

“I am proud to stand with all workers who demand a stronger and fairer New Jersey economy that works for every family,” said Murphy in a statement sent to 32BJ SEIU members Monday. “Today, we honor Dr. Martin Luther King Jr.’s legacy of fighting for justice—a legacy kept alive by airport workers fighting for a fair wage. Tomorrow, and together, we will turn the page and begin anew the work to strengthen our communities and our economy.”

The rally at Newark Airport has become an annual rite of passage for airport workers for the past several years. In 2014, the Port Authority of New Jersey and New York said they’d work on a plan for better wages and benefits for airport workers. In 2017, New Jersey Gov. Chris Christie vetoed state legislature that would have raised workers’ wages to $18 an hour with benefits.

New York workers are now picking New Jersey workers up in a show of solidarity.