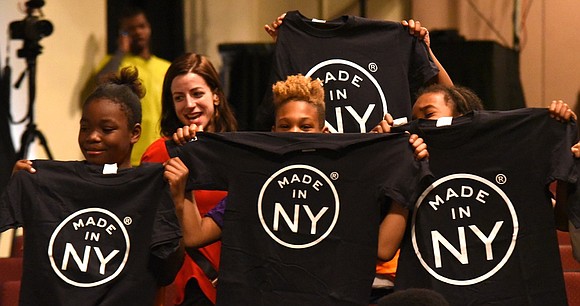 At Harlem’s Oberia Dempsey Multi-Service Center Thursday Jan. 11, New York City’s Office of Media and Entertainment, in partnership with the Neighborhood Opportunity Network and The Animation Project, unveiled an exciting new initiative called the Made in NY Animation Project. Much more than teaching basic skills, this project prepares young New Yorkers for careers in the burgeoning areas of media and entertainment. The New Animation Industry Council, made up of professionals from New York animation studios, directly advise the program.

Digital animation is a rapidly growing sector of the entertainment industry, sought after for everything from advertising to video games, and from film and television to fields such as health care and architecture. New York City is a leading urban area for employing multimedia artists and animators, second only to Los Angeles. The field is projected to add 10,000 well-paying jobs to the city’s economy by 2024, fueled by increased demand for graphics and visual effects in video games, film, television and mobile devices.

Media and Entertainment Commissioner Julie Menin explained, “When we talk about animation people think about cartoons. That’s not what we’re talking about. We’re talking about applications for things like digital content for health care. Animation comes so much into play today in how we interact in so many different sectors. That’s why it’s so vitally important that we’re offering this training to so many young New Yorkers.”

This past summer, the Made in NY Animation Project rolled out lab groups at Neighborhood Opportunity Networks in each of the five boroughs. These NeONs are community-based offices that offer a wide range of free program and services to people on probation and other community residents. NeONs are located in Brooklyn, Queens, Bronx and Staten Island. The participating NeONs are offering the program at no cost in 12-week cycles throughout the year. The Made in NY Animation Project has expanded into 10 middle and high schools in these neighborhoods, with courses offered during the school day.

The program actually started with the Department of Probation. It was made available as a job training option to some of the people the department serves. Ana Bermudez, commissioner of the New York City Department of Probation, said, “We were kind of the originators, if you will. We have been using the animation project for a very long time. Young people on probation develop the skills in animation that this project brings to bear. In this administration we come together in unusual ways, and when we heard that the Mayor’s Office of Media and Entertainment wanted to bring in funding and an experience for young people in New York City around 21st century job skills and around media and entertainment, it was a no-brainer to put those two things together and expand the animation project to the whole city, beyond young people on probation. Especially those who wouldn’t normally have access to this technology and opportunity.”

One of the people who participated in the program with the Probation Department is Chris Moses who at 14, found himself on probation. He was approached to do the animation program and jumped at the chance. Having completed the program in which he mastered applications such as Photoshop for image editing and 3ds Max for gaming animation, he now interns with The Animation Project. Moses also shares his experience with his friends in his Coney Island neighborhood in the hopes that they will be encouraged to participate. “I tell them how it changed my life and how it can change theirs as well, even though it’s not gonna happen immediately,” he said. “It is a steppingstone to get to where

Seasoned professionals in the areas of film, television, advertising, animation, design and visual effects run the training programs. One of those people is animation producer Lightning Yumeku. His company, 3 Degrees Films, is based in Harlem. “We make pilots for people who want to pitch their ideas to major networks and we also make and design children’s books and music videos,” said Yumeku, who was on hand at the announcement Thursday morning. He added that he is “looking forward to the opportunity to help a lot of kids realize and achieve their potential as new animators, designers and creative people.”