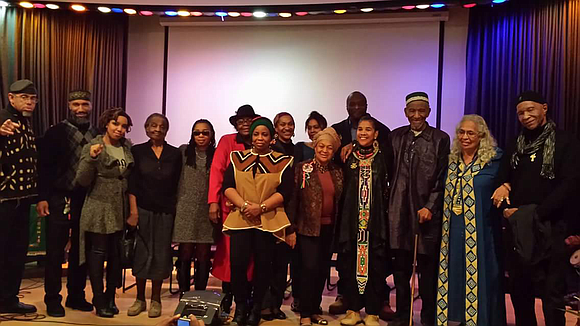 Various grassroots activists will pay homage to this country’s forgotten segment of society and their families with the 22nd annual Freedom Fighters Dinner Tribute Saturday, Jan. 27, 3 p.m. to7 p.m., at the Unitarian Church of All Souls,1157 Lexington Ave., New York, N.Y. Sponsored by the Malcolm X Commemoration Committee, all proceeds from this event go to commissary accounts of the political prisoners of war who will be represented at this dinner/tribute.

This year, “Those Who Spread the Word: Our Revolutionary Griots” will also be acknowledged, recognizing the works of Black journalists and artists “who have gone out of their way to expose the injustice of U.S.-held political prisoners, and who are actively involved in fighting for their release.”

Those to be honored include Nayaba Arinde, New York Amsterdam News; Basir Mchawi, Education at the Crossroads; Sally O’Brien, Where We Live; photographer Solwazi Afi Olusola; and performing artist Ngoma.

“You would think that given the impact of the Black Panther Party and the larger Black Liberation Movement on the American media order, an impact which created career opportunities for Black journalists like no other period in history, we would have a much wider net of journalists to honor,” noted Zayid Muhammad, MXCC press officer. “Unfortunately, that is not the case. Black journalists would rather focus on their careers in a pathetically non-confrontational way than on the demands of our struggle as our rights and opportunities continue to erode in what revolutionary journalist, political-prisoner Mumia Abu-Jamal so aptly calls ‘the Great March Backwards.’”

Hundreds of revolutionary activists have been separated from their communities and relatives after being kidnapped and forced to languish in the belly of the beast, simply for fighting for their human rights to be liberated from government-sanctioned oppression and tyranny. Those who document those efforts often are overlooked, but not today.

“Mumia’s case amplifies what’s wrong with the state of affairs of our struggle, and in particular the struggle to free our political prisoners,” stated Dequi Kioni Sadiki, MXCC chair. “Black journalists do not even unite to support Mumia, one of their own professionally, not to mention the rest of Mumia’s comrades, many of whom have now been locked down for over four decades. In spite of that, we are absolutely proud to be able to recognize those journalists who do.”

Amina Baraka and the Red Microphone will be special guest performers, as will poet Shellyy Spinelli.