Brooklyn students honored for their art, essay and poetry tributes to Dr. King’s legacy and life 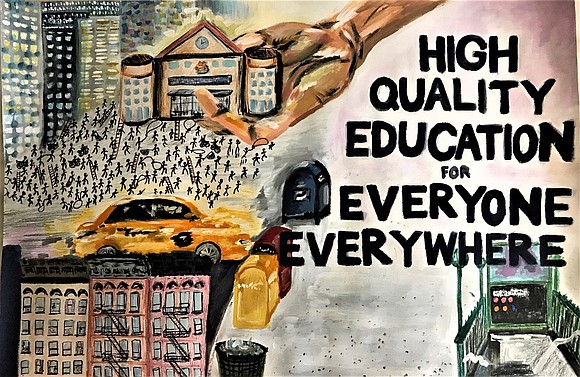 The 33rd annual Family Celebration of Dr. King’s Life and Legacy, sponsored by the Central Brooklyn Martin Luther King Commission, was held at Medgar Evers College in Crown Heights, Brooklyn, Saturday, Jan. 13. A total of 27 elementary, middle and high school students received top honors for their submissions to this year’s art, essay and poetry contests. Brooklyn Technical High School won the Participation Award, with the most contestants entered in the three contests, and P.S. 45—The Horace E. Green School in Bushwick—won the School Achievement Award for having the most successful cohort of students.

The commission’s contests celebrate and fulfill Dr. King’s legacy by developing young people’s critical thinking about current social justice issues and by providing inspiration at this critical point in America’s history. This year, more than 250 students from 18 schools participated in the three contests.

Contestants, their families and their friends filled Founders Auditorium, reviewing the artwork on display and cheering the essayists and poets as they presented their works. Supreme Court Justice Evelyn Laporte and Civil Court Judge Devin Cohen addressed the gathering, and the orchestra and choir from the Park Place Middle School performed the Black national anthem, “Lift Every Voice and Sing,” and “It’s Quiet Uptown” from the hit musical “Hamilton.”

“... [H]ow do we, as citizens, react to ‘unjust’ laws and can anything be done? There are various courses we can follow, however a nonviolent approach will have the greatest and positive impact. ... As a future leader I would follow the path that Dr. King has forged—a peaceful approach when dealing with any type of wrongdoings by the government. I would condemn those who use brutality. I would use my platform to call for resistance in forms such as boycotting, walk-outs, marches, parades and so much more. I would hold speeches and meetings that would be broadcast around the world for viewers to tune in to. I would entail the help and cooperation of political leaders to gather support on the federal level. As a future leader, I would fight for what is fair and not settle for any less. When dealing with ‘unjust’ laws, there is no negotiating or bargaining, but only doing what is right.”