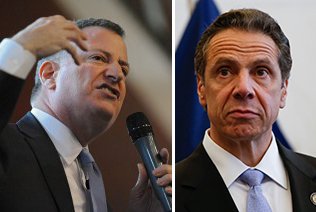 Tuesday marked yet another day in the battle over the MTA and, in particular, the subway. The Mayor’s Office and Lhota and MTA President Pat Foye held two separate conference calls addressing New York State Gov. Andrew Cuomo’s plans to fund and fix the subways.

Cuomo’s plan, included in his latest fiscal budget proposal, would allow the MTA, without city approval, to collect revenue from the rising value of real estate in the city. Referred to as a “Value Capture Plan,” the MTA would establish transportation improvement districts around the city from which the MTA can usurp money.

“Value capture has been effective around the country,” said Foye during the MTA conference call. “It’s an effective and progressive way to fund the MTA.”

During the other conference call, New York City First Deputy Mayor Dean Fuleihan and city lawyer Zach Carter said that the money generated by the city needs to be used for other city-related projects. Fuleihan said the city has “many urgent needs” and that the city needs to collect all of the real estate taxes to fund its $86 billion annual budget.

“We certainly object to the arbitrary nature of the value capture proposal, which targets in a way that’s unprecedented for local governments that targets specific projects in New York City and takes most of what they claim would be of value determined without any local input by the MTA,” said Fuleihan. “The city has significant obligations that we need to keep, that we need to make sure we are able to commit to—safest big city in America, universal pre-K for 4 years old, expansion of pre-K, we can go on—addressing the opioid crisis.”

After hearing of the city’s conference call, Lhota said that he needed to provide a retort to the mayor’s team.

“When the mayor’s people were having their telephone call, I was meeting with Speaker Corey Johnson regarding the subway action plan,” said Lhota. “As I was leaving City Hall, I was briefed on it and felt like we needed to respond.”

But one nonpartisan organization has the mayor’s back. Carol Kellerman, president of the Citizens Budget Commission, said that putting the onus on the city to fund capital improvement to the subway is unjustified.

“The Executive Budget asserts the responsibility for funding New York City subway and bus capital improvements should rest solely with the City of New York, which would require a sevenfold increase in city capital contributions,” Kellerman said in a statement after the budget was revealed. “In addition, the Metropolitan Transportation Authority would be authorized to establish Transportation Improvement Districts within New York City that capture revenues from rising property values—without the city’s approval.

Under Cuomo’s Subway Action Plan, the state would provide $254 million in operating aid for their half of the plan that deals with customer service, delays, system failures and improvements. As part of the action plan, the state’s financial plan would include $175 million in new capital funding for the MTA.

One place the mayor and the governor almost meet is congestion pricing. Cuomo recently told WCBS Radio’s Michael Wallace of his plan to charge $11.52 for cars entering Manhattan south of 60th Street.

“We have new technology that we just developed,” said Cuomo. “You notice as you go into a bridge or tunnel in downstate New York, you don’t pay at a toll booth, it’s all electronic. We just put that in over the past couple of years. And it’s actually worked quite well. So we can put that technology anywhere. We can geographically circumscribe a central business district and put that electronic polling right around that district. It’s not going into Manhattan, it’s going into the congested part of Manhattan and ending to that congestion.”

Fuleihan said that the mayor is happy to participate in finding additional means of funding but also stated, “The mayor said his preference is the millionaire’s tax.”

But both sides remain divided over who is responsible for what part of the MTA. During the city’s conference call, Fuleihan and Carter insisted that the city doesn’t have a legal obligation to contribute to capital funds for the subway and said they’d send around legal backup for their stance. Carter also told reporters that New York City is only on the hook for a maximum of $5 million and it was capped via legislation in 1953. Carter said there is “no legal obligation on the part of the city to contribute more” and that what Cuomo is proposing is a tacit admission of what they’ve been saying.

Lhota said he looked forward to reading the memorandum.

When asked how Cuomo and the MTA will force the city to fork over funds for the capital plan, Lhota said “the legislation that’s being put forward by the executive budget would require them to do that.”