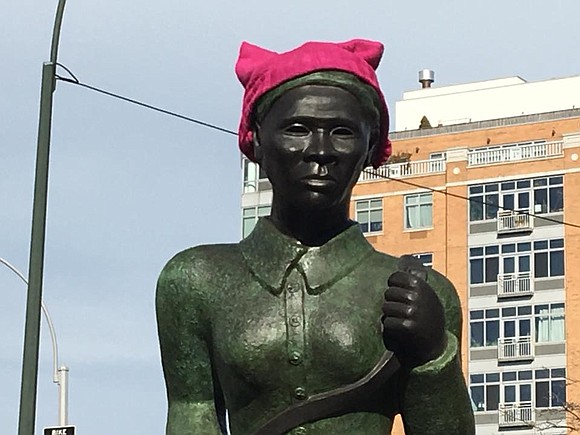 As a symbol of hope, strength and resilience to so many, Harriet Tubman would be an ideal spearhead for a united Women’s March. That is probably what the individual who placed a “pink pussy hat” on the statue in Harlem last Saturday was thinking.

It’s hard to say if the Black heroine who stands firmly at the intersection of St. Nicholas Avenue and Frederick Douglass Boulevard, who during her lifetime led hundreds of slaves to freedom, would even be acknowledged at the Women’s March.

The march, which originated as a Facebook event back in 2016 after Trump’s election night victory, called for a stance against misogyny, sexism and, most importantly, recognizing that women’s rights are human rights. Millions of women across the nation donned their pink hats while holding witty signs and took part in city marches that outnumbered Trump’s inauguration attendance held the previous day.

However, despite the appearances of unity, many women have called out the Women’s March for being non-inclusive of women of color. It has put the concerns and values of women of color on the back burner, in a way that is no different from white-feminist-led movements of the past. To some, the “pink pussy hat” doesn’t represent the 94 percent of Black women who voted against Trump, so why would Harriet Tubman don it?

According to Demetria Irwin of The Grio, “Tubman was a true freedom fighter. Her objective was to get Black people free and she dedicated her life and her own liberty to that singular goal. The ‘pink pussy hat’ brigade is a feminist lite reaction to real problems.”

For decades Black women have tirelessly voiced their concerns and readiness for change when it comes to issues of sexism, racism, gun violence, gender-pay equality and reproductive rights but are somehow always overshadowed by the urgency of white-feminist needs. The Women’s March can be eerily reflective of the same issue, but now with a pink hat on it.

“To put that piece of zeitgeist garbage on the head of a legend is profoundly disrespectful and shows a lack of understanding about intersectionality,” said Irwin. “Putting a hat on Tubman does not link these movements. It does not bring Black women into this fight.”

Tubman, a pioneer of the abolitionist movement, would not have been included in the Women’s March of today. In fact, she would still be advocating for the rights of Black people, especially women, alongside the activists of today.

“Black women have always been our own best advocates, and everyone benefits from our work because we are consistently at the bottom when it comes to wages, civil /human rights and a litany of other topics,” said Irwin.

To mock Tubman’s work with a symbol that would not emphasize her existence or beliefs is not only insulting but also proof that there is still so much more work left to be done. As for Tubman, she still stands and her latest accessory has since been removed.