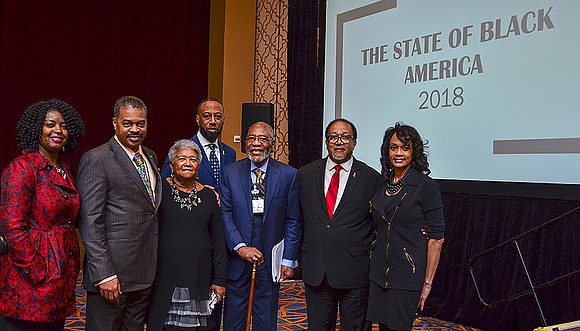 (From left-right) Lisa Frison, the vice president of African American segment strategy at Wells Fargo; Julius Cartwright, the former president of National Association of Real Estate Brokers; Dorothy Leavell, the chairman of the NNPA; Reverend Tony Lee, the pastor of Community of Hope A.M.E. Church; Dr. Amos Brown, the pastor of the Third Baptist Church of San Francisco; Dr. Benjamin F. Chavis, Jr., the president and CEO of the NNPA; and Dr. Lezli Baskerville, the president and CEO of NAFEO. Freddie Allen/AMG/NNPA

Four, preeminent Black leaders in America today, addressed the challenges and celebrated the success stories of the African American community, during a “State of Black America” forum at the 2018 National Newspaper Publishers Association annual Mid-Winter Conference in Las Vegas, Nevada.

And while Reverend Tony Lee, the pastor of Community of Hope A.M.E. Church, delivered fervent remarks about the strong state of the Black Church, it was a fiery, no-holds-barred speech from Dr. Amos C. Brown that brought the capacity crowd to its feet.

Brown, a civil rights icon, who serves as the senior pastor at the Third Baptist Church of San Francisco and president of the San Francisco Branch of the NAACP, touted the virtues of the oldest civil rights organization in America and its importance today.

In what amounted to a sermon worthy of any Sunday service, Brown said the Black Press must tell the story of African Americans.

“Let no one else tell it for us,” he said, before providing a vivid picture of his foray into the Civil Rights Movement, as a teenager.

“One of the problems with the Black community, today, is that we don’t have enough rituals of remembrance,” Brown said.

Referring to the current administration and its policies, Brown said, “‘The man’ is doing today what he’s always done.”

Brown continued: “They say to make sure, ‘If you’re Black you get back. If you’re brown, you stick around and if you’re White, you’re always right. They’re not any better than we are. We came from Mother Africa.”

“From my vantage point, HBCUs in 2018 are strong and getting stronger. In fact, it’s harvest time for HBCUs,” Baskerville said.

Baskerville also said that the vitriol coming out of the White House and the policies that jeopardize voting and other rights are reminiscent of the time when HBCUs were born.

“The actions and words and legislation taking place will turn back the clock, if we let it happen,” Baskerville warned. “But, I say it’s harvest time for HBCUs, because it’s the 50th anniversary of the sanitation workers march [in Memphis] and the death of Dr. Martin Luther King Jr. and we are still going strong. We are 106 strong, but if you read fake news, HBCUs are closing.”

“Most African Americans were stripped of their wealth with the housing decline when trillions of dollars were lost,” he said.

“Real estate is the cornerstone of wealth,” Cartwright said. “That’s the equity we need to pass on to the next generation.”

When it comes to the Black Church, Lee cautioned African Americans not to be disillusioned about religion by megachurches and television evangelists.

Lee said the A.M.E. church is united and membership is beginning to climb; mobilization efforts like the get out to vote campaign in Alabama during the contentious Senate race between Democrat Doug Jones and Republican Roy Moore are also increasing.

Lee noted that Black Church isn’t seeing the type of radical drop off in its membership that White churches are experiencing.

“Most of our churches are 200 or 300 member churches and the Black Church is doing major work in every community,” said Lee. “We are mobilizing when you look at the last election, the Black Church learned a great lesson…we must get back to training our people and understanding the science of mobilization.”