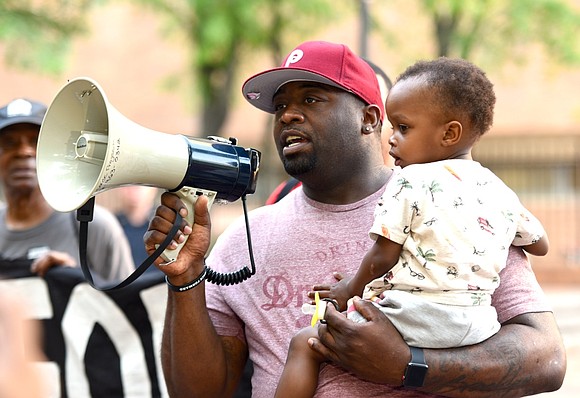 Petitions were signed and calls for justice rang out at the New York Police Department Headquarters on the afternoon of July 2. Families, advocates and community members gathered for a vigil to remember the life of Delrawn Small and demand justice for his death at the hands of NYPD officer Wayne Isaacs.

“This July 4 will be two years since Delrawn was killed senselessly by officer Wayne Isaacs,” said Victoria Davis, the sister of Small. “Nothing about it has gotten any easier, and since that unjust court verdict, it has only made things harder. It has made things harder, not just for our family but also for people in our community.”

New York-based activist groups, including the Justice Committee, Communities for Police Reform, Legal Aid Society, Audre Lorde Project and Picture the Homeless, among others, were in attendance. Chants of “Listen O’Neill and de Blasio, Wayne Isaac has got to go!” and songs of solidarity and remembrance filled the air.

“I think one of the things that we have to understand is that this system is not broken,” said activist Kirbie Joseph. “it is working just fine. It is not something that was made for us as oppressed people, as people of color, as poor people, as LGBTQ folks. It was not made for us!”

Isaacs remains employed by the NYPD on desk duty. Although the NYPD is currently conducting an internal investigation of the incident, it has thus far brought no charges against Isaacs for his actions.

Gwen Carr and Eric Vassell, the parents of police choking and shooting victims Eric Garner and Saheed Vassell, respectively, spoke in solidarity at the event. “We stand here today in solidarity with Delrawn Smalls’ family, as we do always when there is a fallen present,” said Carr. Like Isaacs, the officers who fatally strangled Garner and shot Vassell remain employed by the NYPD.

Carr added, “We have to take a stand, we must tell de Blasio and the Commissioner that they must fire these bad police officers.”

Attendees consistently called for greater oversight and reform from political leaders. The police departments implicated in the shootings of Philando Castile and Alton Sterling, two Black men killed in the same week as Small, fired the responsible officers after opening investigations. Many activists voiced a desire for New York City politicians to enforce similar mandates on the NYPD. “There is no accountability, no transparency, and this has got to stop,” said Carr of the NYPD’s conduct.

“In Alton Sterling and Philando Castile’s case, neither of those officers are employed by their departments anymore,” said Dempsey. “Wayne Isaacs still patrols our communities, knowing that he’s a killer,”

Carr was unequivocal in her instructions for the attendees and broader community. “I want every one of you to make phone calls to our supposed leaders in power,” she said. “We must tell them, ‘We put you there, and we can take you out.’ An election is coming, and that will be our day of reckoning.”

As activists inscribed chalk outlines representing victims of police killings in the Plaza, Dempsey reflected on his brother’s life. “It’s who he was as a man,” said Dempsey. “He truly was a loving caring person. He raised us, he was basically my sister and I’s parent. Delrawn was everything to us.”

Davis added, “He was only a few years older than me, but he was like a father figure to us. It’s only right that we fight for him.”

As the event closed, attendees looked to future action and reform. “The work that I’m doing is for the next generation; for my nephew, for my son,” said Dempsey. “Because if I don’t take a stand now, they’ll be taking a stand again somewhere down the line. We’re doing this to protect them, to make sure that they have a future where they’ll be able to move freely without fearing the boys in blue.”

Others reflected on the long legacy of these violent incidents in communities of color across the nation. “We are standing in a history of oppression and a history of fighting back,” said Joseph. “Yet, I see the future is very bright for our people, because I know that we have fighters here among us.”